This story about the making of Denis Villeneuve’s “Dune” first appeared in the Below-the-Line issue of TheWrap’s awards magazine.

The sandworms get all the love and attention, but if you ask “Dune’s” visual effects supervisor, Paul Lambert, it was the sand around the worms that proved to be the most challenging to create.

When it came to designing those monstrous, iconic sandworms, the good news for the VFX team is that Denis Villeneuve knew exactly what he wanted. These were simple, slow-moving, ageless beasts—hulking beings with rigid plates all along their bodies, revealing small pockets of flesh as the creatures expand and contract like an accordion as they move beneath the desert surface, catching everything in their paths like a whale sweeping the ocean waters for krill.

None of that, though, was the real problem for the team. In fact, initial visual-effects designs for the worms had too much character and benefitted from being simplified. But Villeneuve had another specific request, and Lambert and his team had no real-world, physical reference on which to base it. 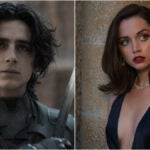 “Denis wanted the dunes to collapse and raise as this thing was moving,” he said. “One thing for visual effects, if you’re able to get a physical reference of something and copy that, they’re far more believable. We scoured the internet to find a great disturbance in the sand, and we just couldn’t find it.”

Failing that, Lambert even asked the “Dune” production team if they could place explosives inside dunes and see what happens, only to be quickly reminded that they were filming in the Middle East. Not a great idea.

“So that didn’t happen,” he said. “Knowing that disturbing this amount of sand was going to be problematic, we started doing test simulations as soon as I joined the project.”

Lambert’s team would simulate every grain of sand to see how it would cascade or explode off the behemoth’s body or how dunes themselves would ripple. And through meticulous trial and error, they would correct for the worm’s scale, make minuscule tweaks to ensure the timing of the sand’s movement was correct and do everything possible to cluster sand into bigger particles and still make sure it looked believable. 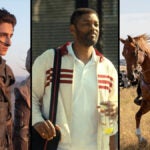 But all that work and attention to detail didn’t just begin in the post-production process. Lambert worked closely early on with production designer Patrice Vermette and cinematographer Greig Fraser to create specific setups and lighting environments in which the virtual world and visual effects would be an extension of what was already built.

Lambert built what he called a 25-foot-high “dog collar,” a sand-colored ramp extending around some of the film’s structures. The backdrop helped immerse the actors in a desert world and allowed Lambert to blend the backgrounds and retain much of the source photography.

“We were building a blue screen, but nobody realized, because it was all sand-colored,” he said. “Visual effects right now is at a point where if you give me a piece of footage, I can replace the background with anything you want. But if what’s in the foreground doesn’t have the lighting for the intention in the background, there isn’t much I can do about it.”