After nearly 3,300 episodes across 19 seasons, Ellen DeGeneres is now stepping away from “The Ellen Show” and the emotion is palpable. In a new clip from her final episode–which airs Thursday, May 26–DeGeneres fights back tears as she walks out for one last monologue.

After a montage of walkouts tracing her journey from the series premiere to the present day, the long-time host is met with an extended standing ovation from the studio audience, which is not a bad way to start off a goodbye. “Thank you,” a visibly emotional DeGeneres tells the crowd.

The final episode will feature Jennifer Aniston, P!ink and Billie Eilish as they look to close out the long-running talk show in style.

DeGeneres first announced the show’s looming end in May of 2021, months after an investigation carried out by production company Warner Bros. into accusations of a toxic workplace and sexual misconduct. The investigation resulted in the firing of three of the show’s lead producers.

“I want you to know that I’ve thought a lot about this decision,” she said last year when announcing that “The Ellen Show” was coming to an end. “I sat with it for a while. I meditated on it. I talked to Portia [de Rossi]. I talked to myself…The point is, I need to take a break from talking.” 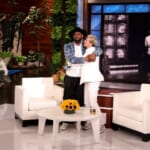 In April, DeGeneres took to Twitter after she completed filming on the final episode to reflect on the show’s long journey.

“Today we taped the final episode of The Ellen Show which airs on May 26th,” her thread began.

“When we started this show in 2003, the iPhone didn’t exist. Social Media didn’t exist. Gay marriage wasn’t legal. We watched the world change, sometimes for the better, sometimes not,” she continued.

“But whatever was happening, my goal was always for the show to be a place where we could all come together and laugh for an hour. Being invited into your lives has been the greatest privilege of my life and has brought me incredible joy. Thank you. Thank you. Thank you,” she concluded. 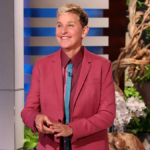