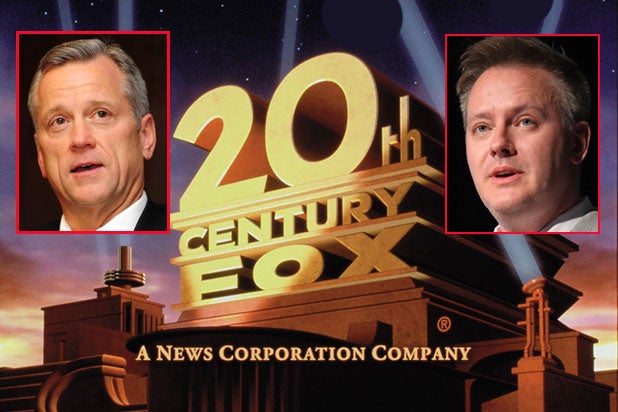 In a major shake-up of its marketing division, 20th Century Fox has promoted Paul Hanneman and Tomas Jegeus, two veteran executives with extensive international experience, to co-presidents of worldwide theatrical marketing and distribution.

Thursday’s announcement comes a day after news broke that chief marketing officer Oren Aviv had been pushed out. In an official announcement, the studio said Aviv will be leaving the company to “pursue other endeavors.” The former Disney executive reportedly had more than a year left on his contract.

Hanneman and Jegeus will take the helm as the studio tries to rebound from a series of flops such as “The Internship” and “Runner Runner.” Indeed, the disappointments at Fox have outweighed the success stories in recent months, with “The Heat,” “Life of Pi” and the foreign box office performance of “The Wolverine” being among the few bright spots in an uneven slate.

The restructuring is a sign that studio chief Jim Gianopulos is putting his imprint on the studio roughly a year after the departure of former Fox co-chair Tom Rothman left him solely in charge of the film division. Gianopulos had left the studio’s executive structure mostly intact for his first year on the job.

It’s also a sign of the increasing importance of the global marketplace to studios like Fox. Its “Ice Age” franchise, for instance, became a $2.8 billion juggernaut primarily because of foreign audiences, while overseas markets added roughly $250 million to “The Wolverine”s’ gross after domestic crowds were lukewarm to the superhero sequel.

Under the new structure, both the domestic and international marketing and distribution teams will report to Jegeus and Hanneman, who begin their new roles immediately. They in turn will report to  Gianopulos.

“Our industry is more global than ever before,” Gianopulo said in a statement. “Paul and Tomas have proven success in the global arena, having run the industry’s most successful international operations, and coupled with our excellent domestic team, they will reshape our worldwide marketing and distribution strategies for the future.”

“We want to thank Oren for his contributions to the studio over the past three years,” Gianopulos added. “He is a class act, who contributed greatly to the studio’s success while here, including his work on such films as ‘Prometheus’ and ‘Rise of the Planet of the Apes.’ We look forward to working with him in different capacities down the road.”

Being a marketing chief at a major studio has been a hazardous occupation of late, with the blame for the failure of certain films landing solely with their promotional teams. Aviv’s exit follows the ousters of Marc Weinstock at Sony, Terry Curtin at Relativity Media and Anne Globe at DreamWorks Animation.

Both Hanneman and Jegeus bring a wealth of experience in movie marketing and distribution, having served as co-presidents of 20th Century Fox International since September of 2005.

Hanneman also first joined Fox International in 1990 and like Jegeus moved on to have important executive roles in major Asian film markets like Korea and Japan.