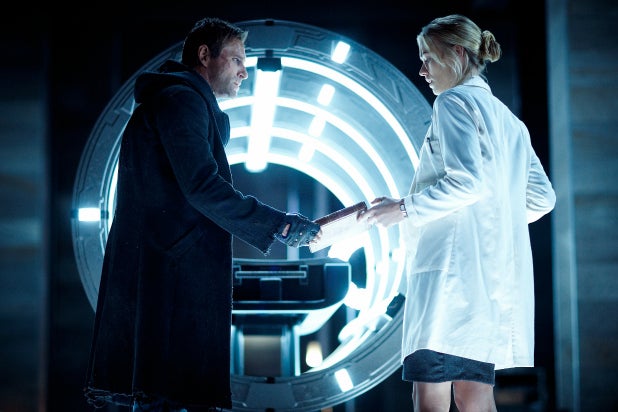 Mary Shelley gets an acknowledgment in the closing credits of “I, Frankenstein,” and one imagines the legendary author putting down her cup of tea to say, “Yes, well, thank you, but I’d rather you wouldn’t.”

If anyone deserves a shout-out for inspiration, it’s the makers of the “Underworld” series, since this movie slavishly follows that franchise’s formula of supernatural warfare and CG overdose, all post-processed into an ugly monochromatic blue-steel sheen.

Instead of vampires and werewolves going at it, this forgettable adventure offers up an eternal war between archangels (known here as “gargoyles,” since that’s how they hide themselves on Earth) and demons. To keep the all-important PG-13 rating, the deaths of each are handled in “Buffy, the Vampire Slayer” fashion: when devils are killed, their souls go underground like a fireball, and when an angel gets taken out, a shaft of blue light ascends into the heavens.

Stumbling into all this is Frankenstein’s monster (Aaron Eckhart), now going by the name of “Adam.” After he buries the corpse of his creator, a group of demons try to capture him on behalf of their boss Naberius (Bill Nighy); Adam manages to fight a few of them off, but it’s only thanks to the intervention of some nearby gargoyles that he escapes with his life.

Also read: Aaron Eckhart Is the Most Handsome Monster Ever in First ‘I, Frankenstein’ Trailer (Video)

Gargoyle queen Leonore (Miranda Otto) sees the flicker of a soul in the beast, and wants to give him asylum, while her lieutenant Gideon (Jai Courtney) thinks that Adam should be killed before Naberius finally gets his hands on him. Adam eventually goes off on his own for centuries, until he’s spotted by a demon in the present day, bringing him back into the conflict, where he learns that Naberius wants to use Dr. Frankenstein’s methods to revive an army of corpses that can host the souls of a demon army.

The action scenes in “I, Frankenstein” cut from overly edited hand-to-hand combat to wide shots of weightless computer-generated creatures battling each other against artificial skies, and back again. And despite the fact that we’re dealing with mythological beings, it’s still an all-boy affair, with the exception of Leonore, one gargoyle and a mortal doctor (Yvonne Strahovski) in Naberius’ employ; she’s apparently the world’s leading expert in bringing rats back to life by pumping them full of electricity, but that doesn’t stop her from favoring really short skirts underneath her lab coat.

Also read: Aaron Eckhart’s ‘I, Frankenstein’ Will Be No Box-Office Monster

I haven’t read Kevin Grevioux’s graphic novel, on which writer-director Stuart Beattie based the film, but I’m going to assume it’s got more heft than the screen version; Beattie, whose screenwriting credits include Michael Mann’s “Collateral” and Baz Luhrmann’s “Australia,” is best known for formulaic action epics like “G.I. Joe: The Rise of Cobra” and the “Pirates of the Caribbean” movies, and “I, Frankenstein” smacks of that brand of impersonal and supposedly-commercial storytelling.

Adam’s motivations seem to change every five minutes or so, as does his makeup — the creature is supposed to be hideously scarred, but his facial stitching seems to fade as the movie proceeds, as though Eckhart didn’t want to do too much damage to his leading-man brand. Bill Nighy, at his best, can make wit and charm seem effortless, but in “I, Frankenstein” he shows us what it looks like when the actor truly makes no effort whatsoever.

Poor Jai Courtney, having suffered through “A Good Day to Die Hard,” gets saddled with another turkey; he’s clearly got action-star chops, but so far they’ve been coupled with really bad luck in the script department.

There are moments in “I, Frankenstein” where the movie feels like it might launch into the silly and entertaining drive-in movie it could have been; instead, it’s incoherent, ugly and lacking in any kind of flash or dazzle. The ending threatens a sequel, but unless they can get Mel Brooks out of retirement to make “I, Young Frankenstein,” there’s really no need.