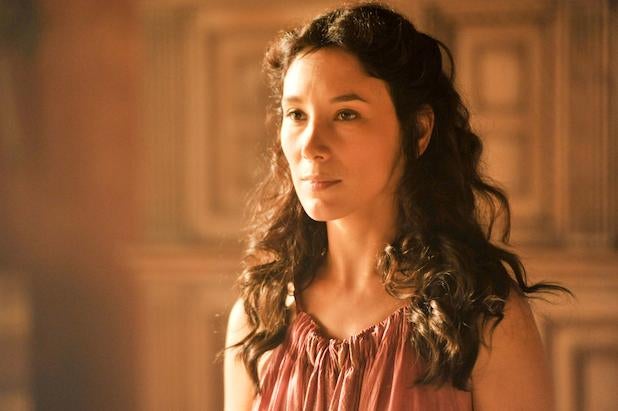 (Spoiler alert: Don’t read any further if you haven’t yet seen the Season 4 finale of “Game of Thrones.)

“Game of Thrones” had yet another stunning finale, and of course, more characters perished.

One of the dearly departed was the love of Tyrion Lannister’s life, Shae, who Sibel Kekilli has played since Season 1, and TheWrap spoke to her about her stunning exit — before we knew it was happening.

See what Kekilli had to say about her characters unexpected fate, why she was in Tywin Lannister’s bed, and which “GoT” death has been her favorite so far in the Q&A below:

TheWrap: So since I’m talking to you ahead of the finale, I have a sneaking suspicion Shae won’t make it to Season 5.
Sibel Kekilli: Oh, yeah, of course. She is dying.

[Laughs.] You’re like, ‘Oh yeah, of course she’s dying.”
[Laughs.] Yes, I know. I want to say “of course.” Everyone on this show is dying like flies. You’re never sure who is going to be the next.

See photos: Game of Clones: ‘Game of Thrones’ Characters and Their Doppelgängers

When did you find out about Shae’s death?
Honestly, there are so many super fans and spoilers. Even my friends were like, ‘You know what’s going to happen to your character?’ ‘No, and I don’t want to hear it, because I haven’t read the books yet.’ ‘No, but I’m going to tell you.’

Of course I knew it. I thought actually, my character was going to die at the end of the second season. I was wondering why I was still alive.

So you thought, “Maybe there’s hope. Maybe they deviated from the books.”
Honestly, every time when I met George R.R. Martin I was begging, I was so annoying. I was like, ‘If you ever think to kill Shae, don’t please. Please, don’t do it.’ And then D.B. Weiss and David Benioff were like, ‘Okay, you know what? You will come back as a zombie.

Yeah, you could be a White Walker. So tell me…how does it happen?
…(Sibel gives the details, I proceed to freakout)…

So does this mean that she was working with him the whole time, or was this after Tyrion sent her away?
I really think that she loved Tyrion, truly and honestly from the bottom of her heart. She was loyal. She even cleaned the pots of Sansa. She took care of Sansa. She loved Sansa, too. She did everything for him. She was there when no one was there for Tyrion, so I think she was really in love and truly loved Tyrion.

But at one point, Tyrion stepped over the line when he said, “You’re a whore and you can’t bear my children.” It was like punching her in the face. Before that scene, she sees how Tyrion behaves or treats Sansa really lovely and tenderly, and she sees that, so this jealously of loving woman is growing inside of her.

At that point, where Tyrion says, “You’re a whore,” it’s like an earthquake. Her foundation is just shaking.

When she showed up at Tyrion’s trial, I wasn’t sure if she was coming back as a bitter, scorned lover or had some sort of a plan up her sleeve.
It was two things. I think it was blackmailing from the Lannisters, because she’s a prostitute. She’s again where she was before she met Tyrion. She’s a low born, she doesn’t anybody or any family. So as a woman, what can you do? Nothing. You have to take care of yourself, and if the Lannisters want something, they get something. If Cersei wants something, she gets it. It’s my opinion that Cersei forced her somehow. She said you can die, or you can help us.

Of course, it’s also revenge. Like, you know, ‘Tyrion, you wouldn’t be here or I wouldn’t here if you had left with me a few years ago and just went to Pentos. So it’s because of you, I have to be here.’

Aw, man. I can not wait to see this episode now! Like you said, people are dropping like flies — the deaths are always shocking, even if you expect it. What was your favorite death on the show so far?
Umm…Oberyn.

I literally screamed for 15 minutes after I watched that.
I have to say that the Red Wedding was really hard, because it was so emotional. But the best memorable death scene till now was his death. It was like smashing a watermelon. You know, it was like, ‘Oh God. Stop talking. Just kill the mountain and save Tyrion.” That’s so mean, this death scene, to depress the eyes and the head. It was so, I have to say, fantastic.

Have there been any moments on the show that surprised you, even though you’re a member of the cast.
There are some parts where it’s written, but you’re still surprised when you see the fighting scenes, or the Red Wedding. For example, I didn’t know exactly how King Joffrey died. When I watched it I was like, ‘Oh God. Holy shit. What a face!’ So it’s surprising me every time. Even if you are in this cast in that show, it’s surprising you. That’s the reason I guess why all the people who work there are fans. There are so many different worlds and actors in this show, you can’t know everything about everyone. It’s impossible.

There’s been a lot of talk about gratuitous nudity in the show. Do you have any thoughts on that?
I don’t know. I think it’s a part of the show. It’s the bloody thing. No one is talking about, for example, when Arya — as a child — killed the first time. No one is saying, ‘Oh my gosh! What is happening there?’ They even say, ‘Go Arya, go!’ As a child, killing someone is, for me, worse than nudity.  In ‘Sopranos’ there was nudity. In other shows there is nudity, like ‘Sex and the City,’ so it’s just a small part of the show. The bloody stuff — to punch the face like a watermelon — it’s worse.