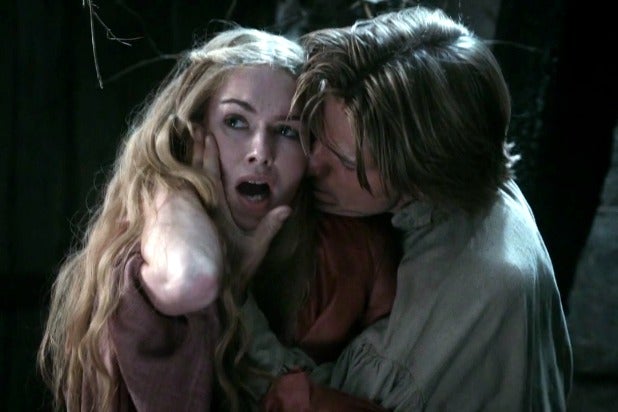 It was the most shocking, wrenching scene on Sunday’s “Game of Thrones”: Jaime Lannister, after weeks of rejection by his sister, Queen Regent Cersei, rapes her alongside the lying-in-state corpse of their dead son, King Joffrey.

It was hard to watch on every level: A rape, incest, sex next to a child’s dead body. And it isn’t even in the books.

Also read: ‘Game of Thrones’ Shocker: Is It Wrong That I Really Enjoyed That?

Fans and critics have debated why showrunners David Benioff and D.B. Weiss opted to include the scene, which was decidedly different in the novels on which the series is based.

Their author, George R.R. Martin, said in a discussion thread on his blog Monday that he didn’t remember ever discussing the changes to the scene with the Benioff and Weiss.

Here are his comments:

In the novels, Jaime is not present at Joffrey’s death, and indeed, Cersei has been fearful that he is dead himself, that she has lost both the son and the father/ lover/ brother. And then suddenly Jaime is there before her. Maimed and changed, but Jaime nonetheless. Though the time and place is wildly inappropriate and Cersei is fearful of discovery, she is as hungry for him as he is for her.

The whole dynamic is different in the show, where Jaime has been back for weeks at the least, maybe longer, and he and Cersei have been in each other’s company on numerous occasions, often quarreling. The setting is the same, but neither character is in the same place as in the books, which may be why Dan & David played the [scene] out differently. But that’s just my surmise; we never discussed this scene, to the best of my recollection.

Also, I was writing the scene from Jaime’s POV, so the reader is inside his head, hearing his thoughts. On the TV show, the camera is necessarily external. You don’t know what anyone is thinking or feeling, just what they are saying and doing.

If the show had retained some of Cersei’s dialogue from the books, it might have left a somewhat different impression — but that dialogue was very much shaped by the circumstances of the books, delivered by a woman who is seeing her lover again for the first time after a long while apart during which she feared he was dead. I am not sure it would have worked with the new timeline.

That’s really all I can say on this issue. The scene was always intended to be disturbing… but I do regret if it has disturbed people for the wrong reasons.

Martin declined to discuss the issue further, noting that it was off the topic of the discussion thread.

Some have noted that the scene did serve an important dramatic purpose: It reminded us that Jaime has a very dark side, despite the sympathy he earned last season after losing his hand.

It also reminded viewers how disastrous the Lannister family dynamic is, as if we needed reminding. Two siblings are in an incestuous relationship that has turned non-consensual, and their father is leading the prosecution of a third sibling, Tyrion, the lead suspect in Joffrey’s murder.