At Toronto, indieWIRE polled 25 critics, journalists, bloggers and various combinations thereof, asking them all to grade the movies they’d seen. “A Serious Man” came out on top, followed by “City of Life and Death” (the harrowing Chinese film that may well not be submitted by that country in the Oscars foreign-film race) and “Up in the Air.” “Videocracy” was named best documentary, while Colin Firth (“A Single Man”) and Tilda Swinton (“I Am Love”) topped the lead-performance chart. Oscar voters are unlikely to be paying all that much attention.

Hugh Jackman on whether he’ll host the Oscars next March: “I don’t know. I haven’t been asked.” That certainly leaves things open – and given the near-unanimous praise for his job within the Academy, there has to be a pretty decent chance that he’ll be asked. (Vulture) 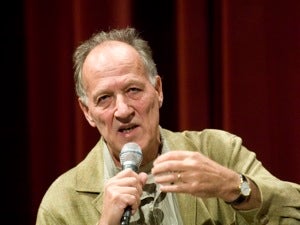 You too can learn to make movies at the feet of Oscar nominee Werner Herzog, at the Rogue Film School. Well, actually, he’s not going to teach you how to make movies. He’ll teach you about “a way of life … a climate, the excitement that makes film possible."   He might also teach you about picking locks and shooting without a permit. But don’t bring your laptop or try to record anything, because Werner will have none of that. Filmmaker magazine sums it up: $1,450, first session in Los Angeles next year, application deadline November 13. Herzog’s own site gives more info, and includes enough pictures of Klaus Kinski to scare off most potential applicants. (Herzog photo: AMPAS)

From the Gotham Awards to the Oscars, Tom O’Neil runs down the awards-season schedule of 16 different kudos-fests. (Gold Derby)

Kris Tapley picks the 10 best best-picture winners of all time. It’s pretty ‘70s-centric and focused on films released during what I imagine is Tapley’s lifetime: the two “Godfathers” top the list, followed by “Annie Hall,” “Unforgiven,” “It Happened One Night,” “Casablanca,” “Amadeus,” “Midnight Cowboy,” “Schindler’s List” and “Platoon.” I could probably live with his list if he’d replace numbers seven, eight and ten with “Lawrence of Arabia,” “The Apartment” and “All About Eve,” and then mix up the order a bit. Tapley’s readers respond with dozens of lists of their own. (In Contention)

If you’re watching a movie from a respected director and you don’t get it, do you give them the benefit of the doubt? Cinematical’s Eric B. Snider did that when he saw the Coen Brothers’ “A Serious Man.” Then he wrote about it.

Oscar blogger fight!   Awards Daily’s Ryan Adams polls his readers about best-picture nominees, giving them 56 movies to choose from.  Hollywood Elsewhere’s Jeff Wells points out why he thinks 45 of those movies don’t have a chance.  Sasha Stone, also of Awards Daily, objects to Wells’ dismissal of all those films. The funny thing is, eight of Wells’ 10 choices are also in the top 10 of the Awards Daily poll. He replaces “Up” and “The Lovely Bones” with “Tree of Life” and “Where the Wild Things Are,” but otherwise his list and theirs are identical: “The Hurt Locker,” “Precious,” “Nine,” “Up,” “An Education,” “Invictus,” “A Serious Man,” “Bright Star.” Those kids oughtta just calm down, find their common ground, and learn to get along.

In honor of Academy Award winner Bruce Springsteen, celebrating his 60th birthday today, here’s the video for his Oscar song, "Streets of Philadelphia."