Years ago, the National Academy of Recording Arts and Sciences decided that they wanted to mount an awards show that had more to do with performances than with awards.

Now they’re taking the next logical step, and mounting a nominations show in which the nominations aren’t all that important, either. 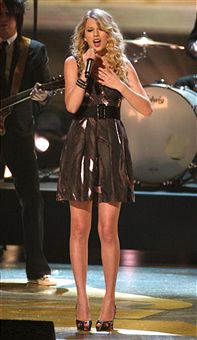 Wednesday night’s “Grammy Nominations Concert Live: Countdown to Music’s Biggest Night” extravaganza, the second installment of a show that was launched last year after decades of typical early-morning announcements, wasn’t really about who was up for the awards.

They may have been the ostensible reason for the show’s existence, but its focus was clearly on the Black Eyed Peas doing two more renditions of the annoyingly ubiquitous “I Gotta Feeling,” and Nick Jonas unveiling his new band, the Administration, and Maxwell turning the obligatory Michael Jackson tribute into a nice moment. It was about the pop stars onstage far more than it was about the pop stars on the lists that were occasionally read.

Of course, unlike, say, the Oscars, the Grammys have always had the luxury of picking and choosing what categories they want to show on the air; that’s a choice you have to make when you’ve got so many categories that there’s no possible way to fit them all on the air. So while a typical Grammy show may take three hours to hand out about a dozen awards, the nominations concert show took only one hour to announce the nominees in seven categories.

That’s seven categories out of 109. A grand total of 35 nominees had their names read on the air, while 512 didn’t.

As for what those nominations taught us, the biggest lesson was entirely predictable: After years of tinkering with the nominations process, bringing in blue ribbon committees in an attempt to assemble credible slates in the big categories, Grammy voters still go for sales more often than not.

Aside from the token rock bands in the Album of the Year and Record of the Year category – the Dave Matthews Band in the former category, and the significantly more apt Kings of Leon in the latter – the top nods were the province of the mainstream pop performers who rule our new “American Idol”-style pop universe: Beyonce, Taylor Swift, the Black Eyed Peas, Lady Gaga.

This wasn’t especially good news for Kanye West, who was shut out of the marquee categories even though he got six nominations. (Beyonce led with 10 nods, Swift had nine, and West, Maxwell and the Peas each had half a dozen.) Other folks who might have a gripe include U2 (nothing in the big categories) and Whitney Houston (nothing at all).

Overall, it was a conservative, mainstream list, full of women and full of big sellers. The kind of self-conscious diversifying that the Grammys sometimes embrace in the Album of the Year category was nowhere in sight, though it was slightly evident in the Best New Artist category, which included country (Zac Brown Band), R&B (Keri Hilson), psychedelic pop (MGMT), alternative rock (Silversun Pickups) and post-punk (the Ting Tings).

As usual, the nominations contained a few head-scratchers, including a big one in the Best Pop Performance by a Duo or Group with Vocal, which was announced on the air: Hall and Oates got a nod for the performance of their 34-year-old hit “Sara Smile” on their recent live album “Live at the Troubador.”

In fact, the list was curiously littered with old songs from live albums from the likes of Hall and Oates, Eric Clapton and Steve Winwood, Liza Minnelli, Jeff Beck, Michael Buble, Shawn Colvin …

But perhaps it makes sense that Grammy voters want to focus on live performances – after all, that’s certainly what their nominations program is built to do.