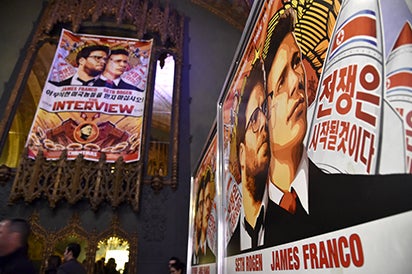 A new wave of leaked emails from Sony’s hack attack reveal the studio ordered its own logos removed from marketing materials and credits on “The Interview.”

Also read: Amy Pascal on Whether She's So Damaged She Can No Longer Lead Sony (Exclusive)

In an email obtained by The Daily Beast dated June 23, 2014, VP Douglas Blakely recapped a conversation with lawyers about removing Sony logos and leaving only their production company Columbia Pictures attached to the Seth Rogen and James Franco film:

“Per our conversation today, please let this confirm for our records that Columbia is electing to not accord any On-Screen or Billing Block credits to SONY in connection with the Film “The Interview”. For reference, this encompasses: 1) omitting references to “A Sony Company” from the Animated and Static Logos; 2) using a “non-hybrid” Animated Logo that doesn’t include SONY; 3) omitting the “Sony”, “Be Moved”, and “Sony Greener World” Cards from the End Crawl, and: 4) replacing the reference to “Sony…” with “Columbia Pictures…” in our End Crawl “Tobacco Disclaimer” Language. Additionally, we’ve been informed that we should remove the SDDS “Bug” from our End Crawl and Billing Blocks for this Film.”

At the movie’s interview-free premiere on Thursday night, one Hollywood blog quoted Rogen as thanking Sony chief Amy Pascal for “having the balls” to make the movie — but the distancing as early as June suggests a different internal strategy. Thursday also saw the announcement that the film won’t screen in Asia.

While Columbia is prominently featured in materials for “The Interview,” it does carry Sony affiliation on platforms like YouTube.

It’s been speculated that “The Interview” is the cause of the nightmare security breach, as the film’s plot to assassinate North Korean leader Kim Jong-un allegedly incensed the country’s government to action. North Korea has officially denied any involvement in the hack. Hackers purportedly representing the group Guardians of Peace (or #GOP), however, have consistently demanded the shelving of the film.

Sony is conducting an internal investigation with the help of cybersecurity firm Mandiant, and the FBI has launched its own probe. A new theory circulating says that if North Korea was indeed involved, they had help from within the company.

Threats continue to plague Sony employees, and the damage count is spiraling out of control: health records for employees and their families ranks among information released, on top of additional embarrassing email revelations mocking the President and blasting comedian Kevin Hart.