Pity the poor monsters of legendary horror movie franchises: Time and familiarity and cruddy sequels render them toothless and soft, formerly ferocious animals one can now pet, their evil energy sapped by fan adoration. To be fair, there is entertainment value in the cartoonish experience of Freddy Krueger as a wisecracking quip machine, or viral videos posted by proud parents of deranged six-year-olds who terrorize playgrounds in Michael Myers costumes. There is Count Chocula.

But inevitably something is lost, and that has also been the fate of the “Hellraiser” film series, of which there were three released theatrically and seven more for the home market. As more and more sequels played fast and loose with creator Clive Barker’s thematic vision for his Cenobites — extra-dimensional entities that sought carnal experience, preying on conflicted human desires and obsessions — the quality suffered and those giddy, early thrills faded from memory. The films’ leading Cenobite, The Hell Priest aka “Pinhead,” once a grand phantom, became a cuddly toy.

The reimagined “Hellraiser,” then, from filmmaker David Bruckner (“The Night House”), is a welcome return to original intent. Alongside screenwriters Ben Collins and Luke Piotrowski (who collaborated on “The Night House”), Bruckner has adapted Barker’s original 1986 novella, “The Hellbound Heart,” and interpreted it with great success as a story of the intangible effects of addiction. 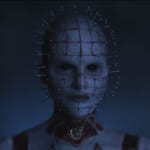 Riley (Odessa A’zion, “Grand Army”) is a young addict struggling to stay sober. Her brother Matt (Brandon Flynn, “13 Reasons Why”), his boyfriend Colin (Adam Faison, “Everything’s Gonna Be Okay”) and roommate Nora (Aoife Hinds, “Derry Girls”) spend much of their time helping her stay on track. But Riley’s new boyfriend, Trevor (Drew Starkey, “Outer Banks”) is a destabilizing force. Enlisting Riley in a robbery, they come into the possession of a puzzle box that, when twisted and turned, ejects a blade that not only cuts the user but also opens a portal to the dimension of the Cenobites.

Once summoned, the creatures demand sacrifices, and the damage Riley has caused in life now wreaks havoc on her friends and family in a supernatural dimension. In this mix is a rich collector of occult objects, a forbiddingly powerful man named Voight (a haunted Goran Visjnic), whose role in the madness becomes frighteningly clear as those sacrifices pile up.

This year’s “Barbarian” is turning horror fans’ heads because it seems to have come out of nowhere, its mythology not yet turned into merch. It hinges on the unknown and commonly held collective fear of pitch-black basements to shockingly fresh effect. “Hellraiser,” in its most effective iterations, has never relied on a spooky setting or the idea of a straightforward slasher. In fact, nothing about its universe has ever been straightforward (or straight, for that matter). 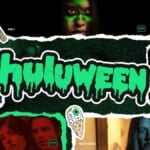 Also Read:
All the Halloween Movies on Hulu in October for Huluween

Now it’s 35 years later, and Bruckner, Collins and Piotrowski understand that the jolt of the new is a lost cause for an established narrative. Instead, they refine and expand details, grounding the human leads in the kind of empathy-driven despair that just might make a character consider losing themselves in another world of sensory exploration with a pack of grotesquely gorgeous new friends.

The film is a balancing act that rides the fine line between sparking an audience’s imagination with the unknown and satisfying literal-minded questions like, “How does that puzzle box do all that stuff, and where do the Cenobites come from?” In Bruckner’s directorial hands and David Marks’ editing, more information is delivered than ever before, but no plot point is over-explained. Mysteries are allowed their ambiguity. 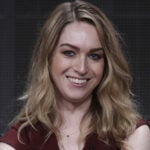 As Riley, A’zion delivers a breakthrough performance that could have, in a less thoughtful production, been reduced to screaming and crying. Her young addict is desperate and real, a mess of a person with a voice that breaks each time she tries to explain her confused and urgent need to make amends both in her daily life and in the supernatural one that has punctured her existence.

Meanwhile, as The Priest, Jamie Clayton (“The L Word: Generation Q,” “Sense8”) gracefully picks up the torch from Doug Bradley, who became legendary as “Pinhead” through the first eight films and has become inextricably linked to the films’ lore. Rather than try to duplicate Bradley’s manner, presence or speech, Clayton’s Priest resurrects the character’s strangeness, commanding the frame with eerie stillness, beckoning hapless humans to indulge sensation no matter the cost. “Accept the pain you have wrought,” The Priest tells Riley, as an invitation to make more of the same. When A’zion responds, “I don’t want this!” Clayton meets it with a seductive, whispered, “Yes, you do.”

And what of that box and those beloved monsters? They’re different here, extravagantly reinterpreted with practical effects and, in the case of the Cenobites, stunning creature design and costume execution from Keith Thompson, Josh Russell and Sierra Russell. Embodying Clive Barker’s original intention of “repulsive glamour,” these Cenobites silently glide on hell’s runway. The assignment was “red flesh and raw meat, but make it fashion,” and their work is an elegant slam dunk.