Filming stretched over four and a half years, forcing Warner Bros. to delay its release by eleven months. Production got off to a rocky start on the first day of shooting when a special camera the crew had rigged up to a two-ton robot broke down. The device was intended to hurtle towards stars Sandra Bullock and George Clooney before stopping as close as an inch from their faces, so precision was of utmost importance.

“If this didn’t work, it would keep on going through Sandy,” Tim Webber, the film’s visual effects supervisor, told TheWrap. “There were days that were nerve-wracking.”

Now that raves are poring in for the space thriller, it’s easy to forget the delays, mechanical frustrations and near injuries during its production. Critics are comparing “Gravity” to last year’s “Life of Pi” and to films like “2001: A Space Odyssey,” which pushed technical achievement to new levels.

“It’s elevated the bar so high,” Clooney said. “The first time I saw ‘The Matrix,’ I thought, well okay from here on out you can’t go back. I think that this will do something like that with space films certainly, but with science-fiction films in general.”

Recreating the look and the feel of zero gravity was no easy task, and Cuaron admitted that he conceived of his story of two astronauts who find themselves stranded in outer space before the technology existed to realize his outer-worldly visions.

“You want to pretend this is going to be easy,” Cuaron told TheWrap. “And after a while you realize, ‘Wow, how do we do it?’ And then it’s months and months of trying to figure out how. You come to the theory, and then you have to apply the theory, meaning to develop the technology.”

Most of the film unfolds in the cold vastness of space, so clearly a location shoot was out of the question. Instead it fell to Webber and his company Framestore to devise a scheme to make it appear as though Bullock and Clooney were floating weightlessly hundreds of miles above the earth.

“It was absolutely in a different orbit in terms of things I’d done previously,” admitted Webber, who numbers “The Dark Knight” and “Avatar” among his credits. “Trying to simulate zero gravity was just way, way, way more complicated than anything else I’d attempted.  You can’t film anything without it being a problem. If you let go of something like a cup, it stays where it is. It doesn’t fall to the floor. And then there are things like the way people move in space or the way their hair behaves.”

Compounding the issues were Cuaron’s shooting style. The Mexican impresario behind  “Y Tu Mama Tambien” and “Children of Men” adores long, uninterrupted tracking shots and “Gravity” is no exception. The film opens with a shot that is 13 minutes long and three shots account for 30 minutes of screen time. 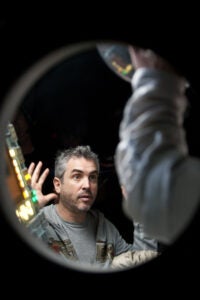 When producer David Heyman heard Cuaron describe his vision for the film’s first scene, he said he realized that the effects would have to be seamless.

“That was the big leap, that was the moment when I went, ‘Oh my goodness, this is going to be much more difficult than I imagined,'” Heyman told TheWrap. “Because the way that Alfonso wanted to shoot it, you couldn’t hide. Most films, you can hide behind a cut. There were no cuts. ”

The film also aimed to be photo-realistic. Unlike other big-budget screen spectacles, “Gravity” is not a fantasy. It unfolds in the present day, which required Webber and his team to grill astronauts and scroll through countless images of NASA crew members and shuttles in the service of verisimilitude.

“As soon as you’re in a fantasy world audiences are more forgiving of what they’re looking at,” Webber said. “But they’re used to judging real stuff as if it’s real, so being accurate in how the sun rises or what part of the earth they’re passing over at any given point becomes essential.”

To solve the technical challenges, Webber relied on a multimedia approach, involving everything from digital effects to wire work. The visual effects team went so far as to tap puppeteers from the West End production of  “War Horse” to man elaborate — and painful — contraptions that mimicked the sensation of weightlessness.

They also constructed something called the “light box.” The 10 foot by 10 foot space was outfitted with more than 4,000 LED lightbulbs and functioned as a giant television screen. It allowed the effects team to play any computer graphics image they wanted in order to get the light from the sun, the stars and other celestial adornments just right. Roughly 60 percent of the film was shot in the box.

While the crew captured the lighting, Clooney and Bullock were forced to perform while strapped into elaborate harnesses.

“Physically, for me, I’m 52 years old, hanging in that box and getting jerked around, I’ve got a bad back, it’s hard,” Clooney said.

All told eighty percent of the film is substantially a visual-effects creation and the other 20 percent contains a significant amount of effects work, Webber estimates. Because of the daunting number of digital enhancements required for each scene, Cuaron and cinematographer Emmanuel Lubezki had to do an enormous amount of pre-production work.

Along with the team from Framestore, the pair devoted more than a year to pre-visualization. All of the lighting and most shots were mapped out before the actors ever set foot on a stage. In fact, the two-ton robot that initially caused such headaches for the filmmakers had every camera movement programmed into it before shooting began.

Improvising on the fly could be costly. Last March, the “Gravity” team was mixing the film’s soundtrack, when Cuaron came up with an idea to change a particular shot.

“It meant flipping the first two minutes of the film, so the craft is upside down,” Heyman said. “We thought, that should be pretty straightforward. But because of the visual effects, it took two and a half months to do.”

Considering the complexity of the work, “Gravity” had a lean staff and budget. With a reported budget of $80 million, it costs less than movies like “Transformers: Revenge of the Fallen” or “Life of Pi,” which had budgets in excess of $100 million. Likewise, Webber said that at its height “Gravity” had a crew of 400 Framestore employees, which pales in comparison to the 1,000 or more people who routinely labor on major blockbuster productions.

“This is a good example of where restrictions can lead to innovation,” Webber said. “I believe firmly that necessity is the mother of invention. When you have limitations, it can lead to better results.”

He added: “Of course, money always helps too.”