Alfonso Cuaron’s “Gravity” is one of the year’s most remarkable cinematic achievements, a taut thrill ride that took the Venice, Telluride and Toronto Film Festivals by storm and now promises to be one of the major players in awards season.

With Sandra Bullock and George Clooney as astronauts left to their own devices after a cloud of orbiting debris destroys their ship, “Gravity” is a lean survival story that took years to make because the technology to convincingly recreate zero gravity simply didn’t exist — at least not to the exacting standards of a director whose previous films included “Y Tu Mama Tamblen,” “A Little Princess,” “Harry Potter and the Prisoner of Azkaban” and “Children of Men.”

Cuaron co-wrote the film with his son Jonas and made it for Warner Bros. with the help of “Harry Potter” producer David Heyman. The two Cuarons and Heyman spoke to TheWrap about the rocky road to a landmark film, and the laws of “Gravity” that the filmmakers observed. 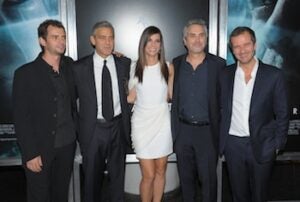 JONAS CUARON: “It was a movie about adversity, so we started trying to think of a scenario where you can stick a character that would be very adverse. And this image came up of an astronaut just drifting into emptiness, into blackness.”

ALFONSO CUARON: “We had that one image, and we were aware of the immense metaphorical possibilities of space. When you have that image, you realize, this is not only the fear of drifting away but the psychological fear of drifting into the void. This character is a victim of her own inertia – drifting farther and farther away from Earth, which is where life is and human relationships are.

“It was always clear that space was going to offer all these metaphorical elements, and we would just trust that audiences would get a sense of it while minimizing exposition and dialogue.”

2. DON’T LET YOURSELF BE INTIMIDATED

ALFONSO: “Our references were not other space movies. They were films like ‘Duel,’ by Steven Spielberg. If I had gone back to ‘2001,’ I would get completely paralyzed and maybe quit cinema and go to work in McDonalds or something. So I didn’t even think about watching that again.”

3. ADVERSITY CAN BRING OUT THE BEST IN CHARACTERS … AND ACTORS

DAVID HEYMAN: “I think it’s easy to underestimate Sandra Bullock‘s performance. She was on her own for 45 of the 60 days it took to film, and it’s an incredibly technical exercise. She may be talking, but every shot links to the next, so she had to move her head at a slow speed to begin here and end there. 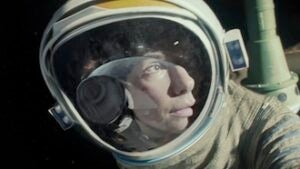 “Or she’d be on a bicycle seat with one leg tied down trying to act like she’s in the fetal position in zero G, doing that in such a way that you never think of the technical or physical exertion. And always finding the truth in those moments, in spite of everything that’s involved in making it.”

4. WHENEVER POSSIBLE, MAKE THINGS HARDER ON YOURSELF

ALFONSO: “We never attempted this film to be a documentary, but we tried to honor, as much as possible, plausibility inside the frame of our fiction. And we tried to honor the physics of zero gravity, or micro gravity, and no resistance. That was a big, big, big challenge.”

HEYMAN: “Alfonso said, ‘I want these really long shots.’ The first shot is 13 minutes. Three shots account for 30 minutes of the film. That was the big leap, the moment when I went, ‘Oh my goodness, this is going to be much more difficult than I imagined.’ Because the way that Alfonso wanted to shoot it, you couldn’t hide. Most films, you can hide behind a cut. There were no cuts.”

5. FIND INSPIRATION IN THE UNLIKELIEST PLACES

JONAS: “I was in London with my dad, because we were supposed to rewrite a project that fell apart. And I showed him a script I’d written called ‘Desierto,’ which is set in the desert. It’s a very different story, but it ignited a conversation about the possibility of doing a stripped-down narrative where you bring down storytelling to its bare minimum. We wanted an experience for the audience where they’re grabbing the edge of their seats for 90 minutes and it’s nonstop action, while also engaging on an emotional level.“

ALFONSO: “We didn’t want to stop for the emotional stuff – it has to be tight and short. The important thing is for the audience to be grabbed in a more primordial sense.”

ALFONSO: “If you’re going to make a film, you have to be kind of an optimist. I remember, early on in my career, thinking, if I get a little financing, I can organize stuff and shoot a movie in two weeks. You just want to make it happen.

ALFONSO: “I remember the first day we started to test rigs, I was shooting with Chivo [cinematographer Emmanuel Lubezki], and I said, ‘Well, not so bad, no?’ And he said, ‘What are you talking about? This is absolutely horrible, and you know it!’

“He was right. You can’t use conventional wires or rigs. In the film we have characters tumbling and rolling 360 degrees. In a rig you can only go side to side. So if you’ve seen films that they’ve done in zero G in the past, most of them have the mother ship that has the special gravity field where they’re walking around, and then there’s a mission where they go outside the ship in a three-minute sequence with a lot of cuts. And most of the time the characters are holding onto something. Here, the problem is that we have characters who are floating and spinning.

“The other thing is the strain. We tried things with a stuntman who was very fit, but if we had him hanging or if we obscured one leg so he could stand, you immediately saw that he was trembling. Because of gravity, you have weight and you cannot escape strain. So this was about figuring out how to transport the strain from one place to another. In other words, the actors were probably in pain, but the strain was not in the face, or in any visible parts.”

8. HAVE A REASON FOR EVERY CAMERA MOVE

ALFONSO: “When I made ‘Y Tu Mama Tamblen’ with Chivo, we discussed cinematic narrative in which character and environment have the same weight. First, that means we should minimize the closeups and also shoot with wide angles, so you have full depth of field. The environment in many ways is informing your character, either by complementing or by contrast.

“And here, the whole tension is between one character and the void, one character and space. When we researched footage, all of NASA’s footage is just one single shot. So we said, ‘OK, we want this to start almost like a Discovery channel documentary going wrong.’

“At first, you’re watching everything very objectively. And then as the [Bullock] character starts spinning around, slowly you lock into her. You start getting closer to the character, and then you start rolling with her. And then slowly you keep on going in, and actually you go through the visor, and the camera turns into the point of view of the character. And the theory was that then you come out, and you are almost an extra astronaut floating near the character. We tried to create this immersive experience in which you’re in space with them.

ALFONSO: “We split the shooting into two different summers. In the first part of the process, we shot and shot and knew that for the next four or five months, we were not going to see anything. But we had to keep on pre-programming and prepping the shoot for next year.

“That was the worst part, that void. You’re still prepping scenes as you were prepping the year before, and you already shot stuff, and you want to see it, but it’s not ready. It’s a weird, weird time. Every week I said to the visual-effects guys, ‘Show me something,’ and they were, ‘No, we cannot show you something now, because it’s still very early work in progress.’

“The sweet spot came five months after the first shoot. And when I saw the first few frames of the integration, it was like, ‘Wow, this is going to work.’ The scary thing is that it took them five months to do it, and they showed me maybe three seconds.

“So I thought, OK, this is going to work, but I don’t know when the hell are we going to finish this movie.”

10. LEARN YOUR LESSONS AND MOVE ON

JONAS: “When people ask me what I learned as a filmmaker from my dad, the main thing is to never do a movie in zero G.”