Although it unquestionably ennobles the pursuit of space exploration, “Gravity” feels like the polar opposite of a recruitment film for NASA.

Alfonso Cuaron‘s overdue follow-up to “Children of Men” captures the beauty and terror of weightlessness as accurately as one imagines is possible — or a civilian could probably tolerate, anyway. A hard-science tale that offers a uniquely poetic portrait of hope and survival, “Gravity” is a both a virtuoso technical achievement and a powerfully visceral cinematic experience.

Sandra Bullock plays Dr. Ryan Stone, a civilian engineer who joins the crew of the space shuttle on a mission to test an experimental scanning device. But after a cloud of debris destroys the shuttle, its scattered crew — including cucumber-cool commander Matt Kowalsky (George Clooney) — is forced to band together to avoid drifting off into space. As their oxygen supply dwindles and their prospects for survival grow increasingly dim, Stone and Kowalsky make a last-ditch effort to find sanctuary in a nearby space station. But even if the duo manage to make it 100 kilometers with little functional equipment and even less breathable air, they still have to contend with the impending return of the orbiting debris, whose destruction of their one refuge may scuttle any chance they have to return to earth. 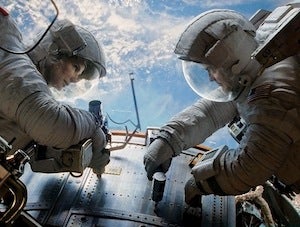 In assembling the film from a concentrated series of vignettes — each of which is photographed in long, fluid takes — Cuaron creates an immediate feeling of verisimilitude, which is amplified by sound design and sustained by denying the audience a consistent horizon to remind them which way is up.

Notwithstanding the massive blue marble that occasionally cascades across the astronauts’ viewfinders as they’re tumbling through space, their environment is basically a pitch-black backdrop of nothingness, and Cuaron’s first-person perspective — including shots from inside Stone’s helmet — makes it impossible for the audience not to identify with her paralyzing disorientation.

Moreover, Cuaron’s ceaselessly inventive camerawork manages to be artistic and functional at the same time, creating set pieces of breathtaking dexterity while also showing the literal physics of how Stone navigates space in zero gravity.

Clooney manages to be a little too Clooney, oozing Danny Ocean levels of confidence and charm as the more experienced of the pair. Bullock, on the other hand, carries the weight of the film on her shoulders and maintains a delicate balance between debilitating fear and pragmatic resilience. After aging out of the ingénue roles that relegated her early in her career to playing spunky go-getters or romantic interests, she has become an increasingly — and successfully — adventurous actress, and she seems to apply her professional uncertainty in the unfamiliar territory of science fiction to the gradual empowerment of her character.

At the same time, the film works best when it communicates character through action rather than exposition, and the only time its emotional power wanes is when Stone and Kowalsky are put in the position of providing themselves with an “arc.” Because, quite frankly, their battle for survival in humankind’s most hostile environment is enough by itself to generate drama, and it needs no additional trauma or back story to give it poignancy.

That said, it’s understandable that the film chooses to supply the audience with a form of verbal expression other than panicked breathing, but with such a straightforwardly potent concept to explore, the deeper underpinnings of their behavior provide an embarrassment of riches — superfluous, but effective, dramatically speaking.

It seems a bit early to declare the film a bona fide masterpiece, but no film released in 2013 thus far has the singularity, and the impact, of “Gravity.” While “Children of Men” is far too accomplished to serve as a trial run for almost anything, this film’s sophistication feels like a direct outgrowth of the experimentation — the alchemy of a unique idea and universal feelings – of its predecessor. Because if that film brought to life a childless world and made you understand the significance of its first new birth, this one not only shows you the fear and desperation of character in a seemingly inescapable environment, but makes you feel like you’re trapped there along with her.

In other words, Cuaron’s technical virtuosity makes it possible to experience a catastrophe without actually having to endure it first hand — which is why “Gravity” may eventually enlist more people to become filmmakers than astronauts.