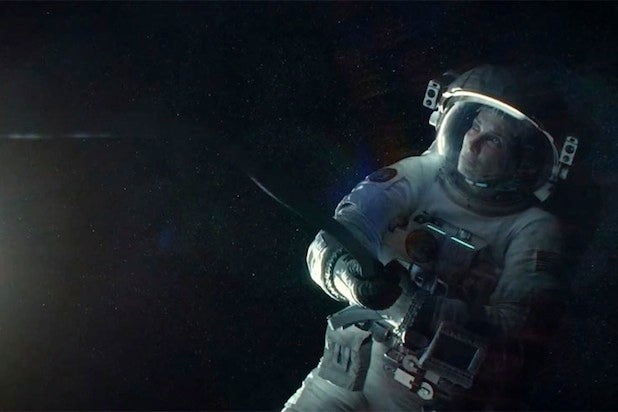 If the end of “Gravity” is to be taken at face value, our heroine — Sandra Bullock‘s chronically oxygen-deprived ride-along scientist Ryan Stone — has quite a story to tell.

But to whom will she be telling it? Her NASA handlers, the rabid press, a nation of adoring fans … or her daughter (and possibly the cast of “Lost”)?

In Alfonso Cuarón’s dazzling 3D survival tale, a burst of third-act diversions leaves open the possibility — to this viewer, at least — that Ryan never actually made it to the beach of some remote paradise.

Not in her Earthbound form, anyway.

Also read: Can ‘Gravity’ Splashdown on Stage at the Oscars?

There’s just enough ambiguity to suggest that Ryan perished somewhere along the way, most likely in the airlock of the Russian Soyuz capsule, moments after she shut down the oxygen supply to hasten what seemed at the time like her inevitable demise.

Or perhaps her final undoing comes when the astronaut who floats up to the airlock window (he’s not recognizable at first, certainly not as Matt Kowalski) pops the hatch; Ryan is freaking out as he spins the crank, realizing that he’s about to eject her into the void. A sleight-of-hand edit even suggests that’s exactly what happens.

And here’s where it gets squishy.

Also read: Why ‘Gravity’ Should Stay in Box-Office Orbit Through the Oscars

The events that take place afterward — Ryan’s otherworldly encounter with Matt, her newfound resolve to carry on, her speech on the way down and that lucky-as-hell landing — play out like an absolution. If Ryan’s soul has in fact detached and drifted early in the third act, it certainly spends the rest of the movie acting out the way things should have gone.

This isn’t to suggest that Cuarón, who co-wrote the screenplay with son Jonas, meant to allow for this theory. Their version may be a simple tale of survival, roll credits, everybody claps and goes home agog. But there’s just enough of a seam between the practical realities of the film’s setup and its payoff for a doubt to wiggle through.

Metaphysical ambiguity is de rigueur for space movies, of course … compared with “2001: A Space Odyssey” or “Solaris,” “Gravity” is downright grounded.

Even if Ryan truly survives all 91 minutes of the film, then the spiritual interlude isn’t such a stretch — there’s plenty of real-world precedent for mystical phenomenon in aerospace. From the spirit-guide visit Charles Lindbergh described during his transcontinental flight to John Glenn’s “fireflies” swirling Friendship 7 to the outlandish tales told by certain moon astronauts, the idea that the friendly ghost of Matt Kowalski shows up to give Ryan a pep talk (and an escape plan) is plausible enough; the idea that she hallucinates it even more so.

But those events also fit if Ryan in fact simply passed out and died aboard the Soyuz, leaving the completion of her journey to the soul.

From her self-affirming soliloquy on the bumpy ride down, to the fact that she lands in water but near the beach (what are the odds of that?) to her near-impossible swim to the surface — even the very look of the verdant, paradisal beach where she washes ashore — nothing dissipates the possibility that she’s landed not on Earth, but the next plane. She just had some personal spiritual/emotional business to wrap up in order to get there.

If you’re buying any of this, then “Gravity” concludes much like last year’s 3D juggernaut, “Life of Pi” — in that you, dear viewer, get to choose whichever version of the story you prefer.

And if you’re not, well … planet Earth is blue, and there’s nothing I can do.