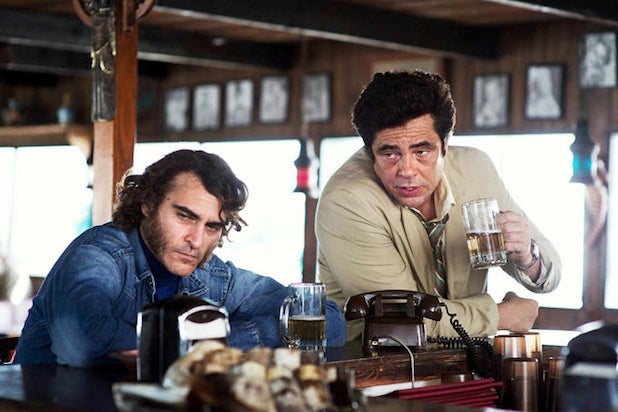 Paul Thomas Anderson‘s “Inherent Vice,” which drew wildly mixed reviews when it premiered at the New York Film Festival, will be a centerpiece gala at the 2014 AFI Fest, the American Film Institute announced on Wednesday.

The film will screen on Saturday, Nov. 8 at the Egyptian Theatre in Hollywood, a booking that puts it opposite the Academy’s star-studded Governors Awards, which will take place two blocks away at the Ray Dolby Ballroom at Hollywood & Highland.

Anderson’s film, his follow-up to and “There Will Be Blood,” is the first-ever screen adaptation of a Thomas Pynchon novel. It stars Joaquin Phoenix as a perpetually stoned private eye in a Southern California beach community in the late ’60s, and also features Josh Brolin, Owen Wilson, Katherine Waterston, Reese Witherspoon, Benicio del Toro and Martin Short.

But other critics disagreed, with Scott Tafoya at RogerEbert.com calling the film “pure black magic, a delirious hallucination and the most entertaining film of the year.”

Also read: ‘Inherent Vice’ Review: Lots of Sex and Drugs, But Where Are the Believable People?

“Inherent Vice” joins three other previously-announced galas: J.C. Chandor’s “A Most Violent Year,” with Oscar Isaac and , which will open the festival on Nov. 6; Rupert Wyatt’s Mark Wahlberg vehicle “The Gambler,” which screens on Nov. 10; and Bennett Miller’s “Foxcatcher,” with Steve Carell, Channing Tatum and Mark Ruffalo, which will close the fest on Nov. 13.

The full AFI Fest lineup will be announced on Oct. 22. Ticket information is available at the festival website.