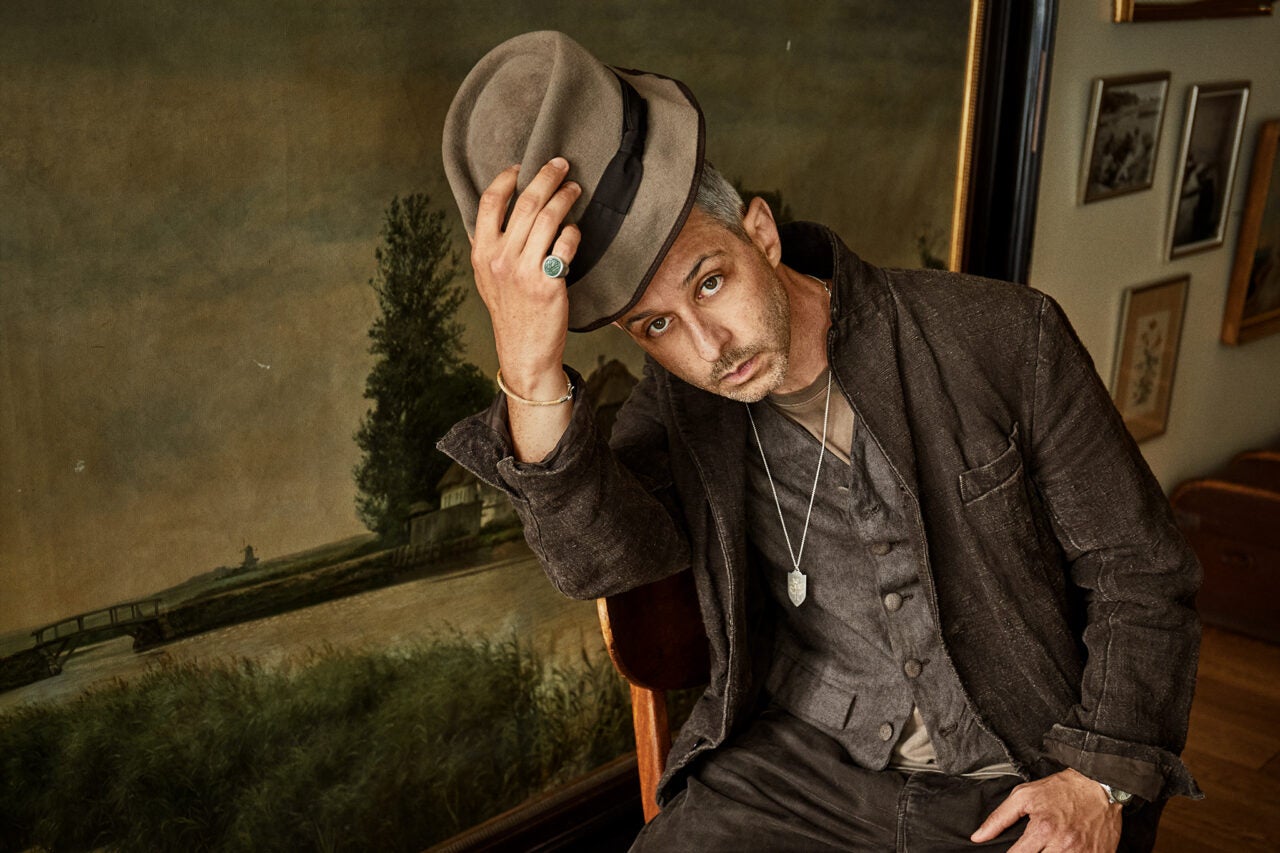 A version of this story about Jeremy Strong first appeared in the “Emmy Hot List” issue of TheWrap’s Emmy magazine.

Sometimes Jeremy Strong rehearses, a lot. But the stage veteran didn’t want to prepare too much for the fateful confrontation that occurs between his character, Kendall Roy, and his totemic media-mogul father, Logan Roy, played by Brian Cox, aboard a yacht in the second-season finale of “Succession.”

“One of the great things about the show is the actors’ process takes primacy,” Strong said in a conversation via video conference across a continent and a half. He was in Denmark, where he has spent the pandemic with his Danish wife and kids. “Brian and I will often not rehearse at all. We certainly won’t talk about the scene. We’ll just do it on camera — and we do it on film, which adds rigor and feels dangerous.”

Dangerous is a good word for what happens in this particular scene as Kendall, the oldest son, is told that he will need to take the fall for the family: Protect Dad, absorb the blow, soldier on. Logan delivers the message with all his alpha energy, unembellished and unapologetic. Kendall, the broken son, listens and buries his response a thousand leagues deep in his soul. The scene is a masterful example of what makes Succession such a roiling cauldron of subterranean emotion, driven by two lead actors who duel to the very edge of emotional cataclysm.

“That scene on the boat, we started to rehearse and we were losing the light,” Strong recalled. “I felt strongly that we shouldn’t release any tension that I felt I had by rehearsing it. So I stopped the rehearsal, to Brian’s consternation.

“Brian is… just a force of nature. Such a heavyweight actor. He’s been on the mountaintop for so long. He has that thing that is a rare quality with actors, which is a sense of danger — there’s something primal about him,” Strong said. “He listens completely. I don’t ever feel like we’re acting. I don’t feel like we’re doing scenes, I feel like we’re meeting in the ring.”

And while they did not rehearse, all the painstaking preparation that went into becoming the character made the moment. “It’s like a rain cloud at saturation point,” Strong said. “The moment you enter the scene, it’s gonna rain. Whether it’s a rehearsal or a take, the moment you start, what’s going to come out will come out with the force of necessity. It feels to me like when you have filled yourself up with the writing, you’re prepared for the scene. It’s super frightening. Moments that have come unbidden, taken over me, it’s directly a result of that sort of approach.”

Strong didn’t set out to be an emotionally death-defying actor, although the effort has earned him an Emmy nomination this year for Outstanding Lead Actor in a Drama Series, alongside fellow nominee Cox. (Seven other members of the “Succession” cast were nominated in supporting and guest categories.) And the Roys, who seem transparently like a riff on the Murdoch family, are strangers to him. He comes from a middle-class family in Boston — his father worked in juvenile justice, his mother was a hospice nurse. Going to public school gave him little context for the Roys’ lavish lifestyle, so he treated the gargantuan yacht they’re all on in that “Succession” scene like “the Toyota Cressida I had in high school,” he said.

Even as an adolescent, Strong’s aim was the theater. He went to Yale, with its legendary theater program, though his degree is in English literature. He debuted on Broadway in 2008, winning acclaim for his performances there and off Broadway, including in “A Man for All Seasons.” He was one of the recipients of the 2008-09 Leonore Annenberg Fellowship for the Performing and Visual Arts, in collaboration with the Lincoln Center Theater.

Strong began moving into movie roles in indie productions, and first came to public attention in Kathryn Bigelow’s 2012 Oscar winner “Zero Dark Thirty.” In fact, his taste for directors and material was pretty remarkable. In three years, Strong appeared in four Best Picture nominees: “Lincoln” and “Zero Dark Thirty” in 2012, “Selma” in 2014 and “The Big Short” in 2015. It was that last film, directed by Adam McKay, in which Short played real-life stock analyst Vinny Daniel, that led to him being cast in “Succession,” on which McKay is an executive producer.

“He was McKay’s idea,” recalled Jesse Armstrong, the creator and lead writer on the show and also an executive producer. “He thought he might be good for Roman (Roy). But Kieran (Culkin) was a slam dunk. And then Jeremy auditioned, and it’s his total commitment. He reads everything he needs to read. He’s pretty armor-plated, faultless. You have the feeling you can throw anything at him. There’s no gaps in his armor‚ he is the character. He’s pretty extraordinary.”

Many others, including top critics, have felt the same. “On a show filled to the brim with bravura performances, Strong inhabits a space so haunting, tragic, and insular — and sometimes, yes, really funny — that you actually begin to worry about his well-being,” Miles Surrey wrote in The Ringer. “But the reward of going through such an emotional gauntlet with Kendall, however, is experiencing one of the best television performances I’ve ever seen.”

Strong, who can quote William Shakespeare, Federico García Lorca and Francis Bacon in the space of two minutes, says the success of his portrayal of Kendall is rooted in Armstrong’s words. “There’s something about his writing that reaches into the base of my spine,” he said. “It kind of activates everything it needs to without my having to do very much. A lot of the job for me as an actor is creating negative space for the writing to act on me, to enter me, to internalize it in a visceral way.

“It’s not about the words and it’s not about the writing. It’s about the plate tectonics of the thing,” he explained. “The groundwater that Jesse and the writers have so masterfully laid in. I feel a sense that the words are sitting on top of volcanic amounts of subtext and subterranean dynamics. As an actor I go to a place in terms of: What does he need and how is he in trouble? How am I in trouble?”

There was at least one time in Season 2 when Strong rehearsed obsessively. That was when Strong learned that as Kendall, he would have to do a rap on camera in front of a ballroom full of family and friends. He had never rapped before. Nicholas Britell, the soundtrack composer as well as music supervisor on the show, recalled, “Jesse reached out and said: ‘Soooo, Kendall’s gonna rap as a tribute to Logan. And it has to be both completely cringeworthy but at the same time kind of really well executed.'”

If that sounds impossible, it did to Strong as well. “I advocated cutting it immediately,” he said, noting that the script said merely: “‘Yo — kick it MC.” “And I said ‘Oh, God, it’s going to be silly.’

“But Jesse always knows how to go too far. He knew it was just where the show lived.” He paused. “But I did think, ‘This might just be silly and I don’t know how we pull this off.'” But after Armstrong sent him an Instagram video of Michael Hess, a billionaire oil heir, who rapped with Nelly at his 30th birthday, Strong decided to take the leap.

Once committed, Strong was naturally going to take it all the way. At the actor’s request, Britell sent a demo of himself doing the rap. Strong used that to practice until he felt like he could comfortably do it by heart. He even added a melody to the chorus, “L to the OG,” which carried the whole scene — sending it viral, becoming a meme and, apparently, a Halloween costume of Kendall in his rap outfit.

“What I loved about that is that it was an example of a way in which Jesse put me through the wringer,” Strong said. “I like to take risks, but that one certainly I haven’t done before. I had three or four days to prepare and learn and do it. So it felt like walking the plank. And it was fun. “Rapping feels very empowering, that alone was nice — to have a chance to express my love for my father.”

It’s been a very long time since Strong wrapped that scene and the rest of the season in 2019. After that he found time to co-star in an Aaron Sorkin movie, playing the hippie anarchist Jerry Rubin in “The Trial of the Chicago 7,” which Netflix has set for limited release on Sept. 25 ahead of an Oct. 16 streaming debut. And after that he holed up in Denmark with his family, waiting for the pandemic to subside in the United States. (Denmark has had the virus under control for months, so life there is pretty normal, he said.)

Season 3 looms, with Kendall as its centerpiece. The character ended Season 2 with a bombshell right after that scene on the boat, one that portends tumultuous changes. Of course, Strong has no idea what those changes will be, since he has seen no scripts — and with the pandemic, it’s been impossible to predict when shooting might start. But it seems clear that the broken, suffering Kendall will be cast aside for a more assertive one.

“I haven’t read Season 3 yet, but it’s a season where I come into my power,” Strong said. “What that power will look like, I’m excited for that dramatically. I think it might be extreme. It’s exciting and frightening for me to think about where he might go. There’s a way in which Kendall goes too far, and I’m interested in where I might go in that reign of power.”