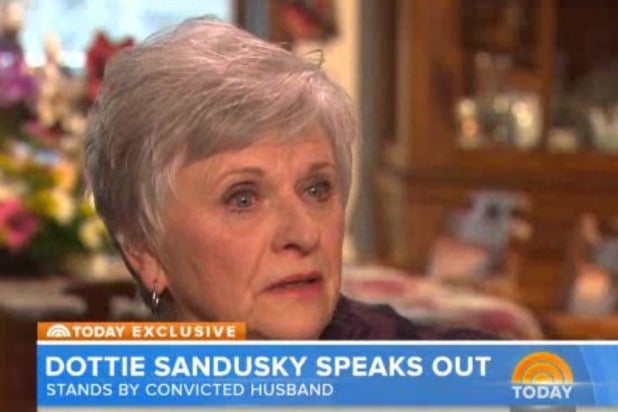 The wife of Jerry Sandusky, the Penn State assistant football coach convicted on 45 counts of child abuse, denies her husband of 37 years molested boys and says his alleged victims were “manipulated.”

In an exclusive interview with Matt Lauer, Dottie Sandusky walked the “Today” anchor through her home, where some of the molestation was alleged to have taken place.

Also read: Lauer’s Dance With Sandusky: a Child Molester Gets a Forum, But Not Sympathy

“There was nothing that went on,” she said. “It is not a dungeon. It is not what those kids said.”

Jerry Sandusky was accused of molesting at least eight boys. The 70-year-old was sentenced to serve at least 30 years in prison. School president Graham Spanier was forced to resign and athletic director Tim Curley and coach Joe Paterno were fired. Paterno died soon after from lung cancer.

One boy said he screamed while being molested. Lauer noted that it is a small house, and that she probably would have heard him.

But she didn’t, Dottie Sandusky said: “because he didn’t scream.”

Dottie Sandusky said her husband did shower with boys.

“I believe he showered with kids,” she said. “And that’s the generation that Jerry grew up in.”

Also read: Jon Stewart to Jerry Sandusky: ‘Horseplay? Are You F—ing Kidding Us?’

John Ziegler, who is making a documentary about the case, said that while it was very inappropriate for Sandusky to shower with boys, and hug one of them, he was not charged with a crime for showering or hugging.

“No one checked the math on this story,” Ziegler said.

Dottie Sandusky said of the victims: “They were manipulated. Once lawyers came into the case they said there was money.”