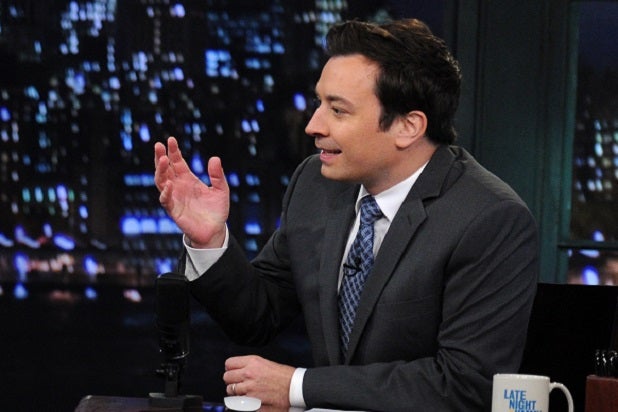 What can viewers expect when Jimmy Fallon takes the reins of “The Tonight Show” from Jay Leno early next year? Pretty much the same thing they’ve been getting with his current “Late Night With Jimmy Fallon.”

“Saturday Night Live” alum Fallon sat down for an interview with the Orlando Sentinel this week and said that he won’t be aping Leno’s shtick — or inheriting any of his bits — for his turn on the iconic late-night show.

“It’s going to be all us,” Fallon said. “I’ve love to have Headlines or Jaywalking, but that wouldn’t make any sense. It’s a good bit. But we’re doing our own thing. I just don’t want to be handed stuff. I want to work and be creative and think of new ideas and keep changing.”

Fallon also said that Leno has been “great to me” — perhaps because, as Fallon told the paper, Fallon made it clear that he wasn’t targeting Leno’s gig when he first took on “Late Night,” which airs following “The Tonight Show.”

“As soon as I got ‘Late Night,’ I called Jay and said, ‘I want to let you know I want to start on the right foot. I respect you.’ I’ve been a guest on the show numerous times,” Fallon recalled. “I said, ‘I’m not gunning for your job. I’m not trying to plot anything. Whenever you’re ready to step down, let me know. But I’m happy at 12:30. And please give me advice on anything.’ He said, ‘Great.’ We started off on the right foot, and he’s been fantastic to me the whole way.

As for handing off the “Late Night” mantle to fellow “SNL”-ster Seth Meyers — who’ll assume hosting duties when Fallon heads to “Tonight” — Fallon admits that he hasn’t dispensed any wisdom to Meyers, but said he’ll be “there for him” should the need for guidance arise.

“I haven’t had a chance to sit down with the guy. I just know I support him and I’ll help him out any way I can,” Fallon said. “I’ve known him for years. I did Weekend Update on ‘Saturday Night Live’ before he did Weekend Update. It’s almost like everything I end up doing I start giving him advice on. We kind of have a shorthand. He’s a smart guy, and I think he’s going to knock it out of the park. We’re two floors away, so it’s not like L.A. and New York. We’re so close. Whenever he needs me, I’m there for him.”