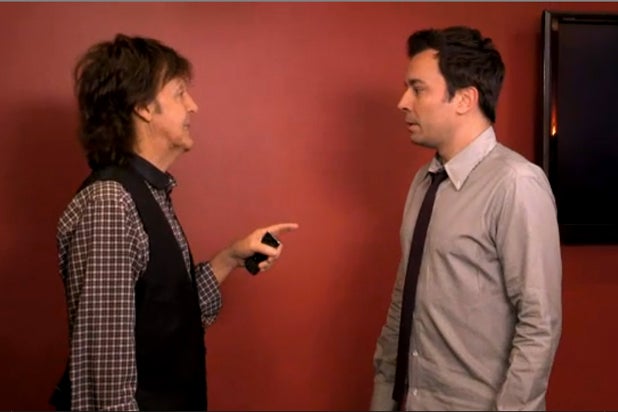 Paul McCartney got a little more than he bargained for while stopping by “Late Night With Jimmy Fallon” on Monday night.

Before being interviewed by Fallon and performing a few of his songs, both old and new, McCartney had to endure the worst indignity of all: an American accent.

Fallon and McCartney, both engaged in cell phone conversations, bumped into each other backstage.

Also read: Paul McCartney Is Turning His Novel Into an Animated Movie

“Terribly sorry about that, Mr. McCartney,” Fallon said in a perfect Liverpool accent.

“No problem, Jimmy,” said McCartney in his best approximation of how Americans speak.

McCartney was not pleased to become American, but Fallon was okay with it: “I sound pretty cool! I sound like a Beatle!”

Fallon’s scouser turn won’t make it to his “Tonight Show” bid, however: after trying McCartney’s accent on for size with “Spongebob Squarepants,” “Honey Boo Boo,” “let me see what you’re twerking with” and “YOLO!” Fallon lost the accent when McCartney head-butted him in the face.