Join us on Tuesday, June 15 at 12 pm PT for the roundtable discussion “Coming Back from Being Canceled: Is There a Way?” — a part of TheWrap’s multi-media series “Conversations on Cancel Culture.”

During this session, professors Joan Ball (St. John’s University) and Gabrielle Gambrell (New York University), crisis PR manager Matthew Hiltzik (Hiltzik Strategies) and pop culture expert Dax Holt (“Hollywood Raw”) will join TheWrap’s Lawrence Yee to discuss whether or not someone can come back after being canceled. The panel discussed the cancellations of celebrities like Nick Cannon and Kevin Hart, and why influencers are especially vulnerable to cancel culture.

On Friday, June 18 at 4pm PT, audiences are also invited to tune into an encore and follow-up discussion exclusively on Clubhouse. 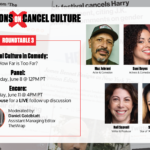 This conversation is the final of four roundtables in a series titled “Conversations on Cancel Culture,” presented by TheWrap. Starting May 25 for four weeks, TheWrap is livestreaming a roundtable discussion every Tuesday at 12pm PT on one of the following topics: journalism, film criticism, comedy and rehabilitation from cancel culture. The roundtables are also available for free on-demand viewing on the “Conversations on Cancel Culture” website. 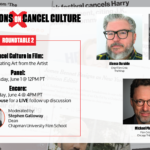 Also Read:
Join a Conversation on ‘Cancel Culture in Film’ with Film Critics from the Washington Post and Chicago Tribune

Joan Ball is an associate professor of marketing and founder of the WOMB Service Design Lab, a participatory action research and service design consultancy for small business owners and social entrepreneurs based in New York. Joan’s research, teaching and consulting work has a strong focus on service design, consumer behavior and how best to create service systems and processes that result in social impact and human wellbeing. 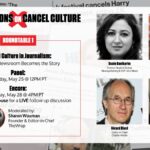 Also Read:
Join a Conversation on ‘Cancel Culture in Journalism’ with the Editor-in-Chiefs of HuffPost, Charlie Hebdo and More

Matthew Hiltzik is the president and CEO of Hiltzik Strategies, a strategic communications and consulting firm specializing in crisis management, strategic counsel and corporate positioning. His clients have included Brad Pitt, Alec Baldwin, Justin Bieber, Drake and more, however much of Matthew’s influence plays out behind the scenes. In addition to having worked on campaigns for Senator Chuck Schumer and Hillary Clinton, two of his PR protégés, Hope Hicks and Josh Raffel went on to become key White House confidants to President Trump and his son-in-law Jared Kushner.

During his 11 years at TMZ, Dax Holt quickly became one of the most recognizable faces of Warner Brothers’ hit daily entertainment show.  While with the organization, he earned two Emmy nominations for his work as a producer and became their top on-air correspondent. Dax is now the host of the ‘Hollywood Raw’ podcast and has appeared on countless other programs such as “Access Hollywood,” “The Talk, “Dish Nation” and more notably “Live! with Kelly.”

About “Conversations on Cancel Culture” Series

The “Conversations on Cancel Culture” series addresses a new wave of pressure to be silent – or be silenced - that has spread rapidly from media to entertainment to politics. Is this a new form of censorship? Or a necessary corrective to entrenched privilege?

That very title “Cancel Culture” is provocative and prone to controversy. And yet we feel it is important to have thoughtful and robust dialogue around this issue which encompasses both free speech and accountability, the rise of social media pressure groups and the real-life violence that has sometimes also ensued.

The series will talk to journalists, comedians, film critics and academics among others to address this complex topic that is – just to confuse things – being hijacked for all manner of misinformation and political posturing.

Left unexamined, “cancel culture’ threatens to undermine the free exchange of ideas. Debate, discussion and disagreement, and tolerance of those who hold different beliefs.

For more information about Conversations on Cancel Culture, a multi-media series by TheWrap visit: thewrap.com/cancel-culture-series