Don’t belieb it for a second.

The celebrity viral prank trend jumped the shark Friday night when Justin Bieber Instagrammed this photo of himself with an elaborately mocked-up “script” for Warner Bros.’ 2015 supermashup Batman vs. Superman that was watermarked “Bieber” (full screenshot below).

From Edgar Wright’s little Ant-Man stunt at Marvel to Jimmy Kimmel’s twerk fail video (we didn’t buy that one either, by the way) and J.J. Abrams’ “trailer” for a book he didn’t even write, poking a stick at the internet sure has become a real famous-person pastime lately.

Also read: ‘Twerking Girl on Fire': How Jimmy Kimmel Fooled the Internet (and ‘The View’)

So what’s really going on here?

After Kimmel came clean, he admitted he had three teams of writers working on viral ideas — and he certainly has the resources to gin up a pretty convincing script title page. But it would be unseemly for a show from the Disney/ABC family to punk (and thereby promote) a Warners/DC Comics IP.

Oh, and then there’s this, which came hours before the Bieber image that launched a thousand blog posts:

Off to do something funny or…die 🙂

Holy not very subtle use of ellipses there, uh … “#Robin.”

If it is indeed Funny or Die behind this, we’ve got to hand it to ‘em: They did their homework. The title page says it’s written by David Goyer and Zack Snyder — check, check — and the address and phone number are at least generally accurate for the Burbank studio. Nothing you couldn’t find on IMDb, though.

One thing you won’t find on IMDb: Justin Bieber in the Batman vs. Superman flick.

Warner Bros. would NEVER let that script (which we’re pretty sure is far from done) leave a locked office, let alone go flying around in Calabasas at 100 m.p.h. with a reckless child. (We did check with the studio; they haven’t gotten back to us, and we’re not holding our breath.)

Have your fun while it lasts, Internet. Ben Affleck still has what’s left of his dignity. 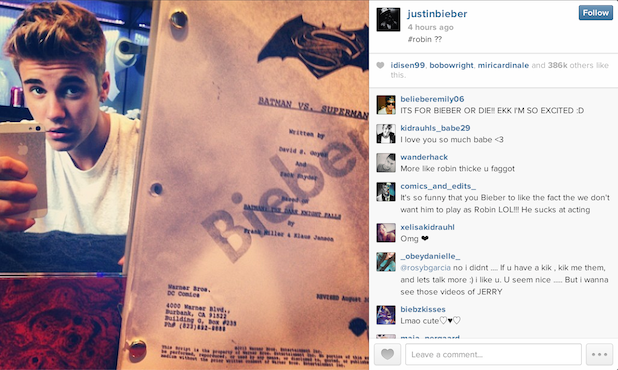