This year’s Oscars went to infinity and beyond with a new trailer for Disney•Pixar’s “Lightyear.” And, true to the celebration of cinema, it is confirmed that, unlike Pixar’s “Soul,” “Luca” and “Turning Red,” this next film will be headed to theaters and IMAX.

Chris Evans, the voice of the new Buzz Lightyear (sorry Tim Allen), introduced the new clip from “Lightyear,” which wasn’t that different from the promotional materials already released, although there were a few new shots in there (not that we’ve been forensically cataloguing every shot, because that would be super weird, right?)

Even bigger than the new footage is the news that “Lightyear” will be headed to theaters, including IMAX large format theaters. This will be the first Pixar animated feature to have a wide theatrical release since “Onward” came out in the spring of 2020 just a few days before the pandemic shut everything down.

There have been various reports that Pixar animators were disappointed by their relegation to Disney+ original films, although they have been hugely popular – “Soul” won the Best Animated Feature Oscar last year and “Turning Red,” released earlier this March, set records on Disney+.

Still, it stood to reason that “Lightyear,” tangentially part of the “Toy Story” franchise and carrying with it the colossal weight and expectation (and oversized merchandise potential) that goes along with it, would be a theatrical-exclusive endeavor. It was far from a sure thing, though, so it is good to know that it will be hitting theaters – and IMAX too! 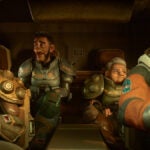 It hits theaters and IMAX on June 17.