The Oscar animated feature category, which only days ago seemed in danger of falling short of the 16 eligible films necessary to yield a slate of five nominees, may now reach that mark with room to spare.

First, “The Missing Lynx” director Raul Garcia confirmed over the weekend that he submitted his film to the Academy and booked a one-week qualifying run at Laemmle’s Town Center 5 in Encino, apparently bringing the total number of eligible films to a very sweet 16. (If between eight and 15 films qualify, the category can only have three nominees.)

Now, the filmmakers behind the French/Belgian animated feature “A Town Called Panic” reportedly have qualified their film as well. 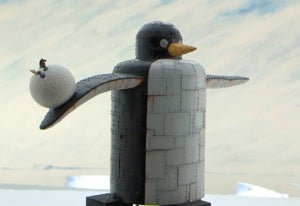 Initially, “A Town Called Panic” appeared not to qualify, because its U.S. distributor, Zeitgeist Films, had booked it for a week in New York but had no plans to show the film in Los Angeles County, which is a necessary step for Oscar eligibility.

But filmmakers Stephane Aubier and Vincent Patar didn’t need Zeitgeist to submit the film – Oscar rules require the submission forms only be signed by the film’s producers, and I hear that Aubier and Patar did just that.

In addition, Laemmle Theaters confirms that the film is now booked for a one-week engagement at Laemmle’s Claremont 5 – a low-profile, out-of-the-way theater, to be sure, but one frequently used for Oscar-qualifying runs. It’ll play there from Dec. 11-17.

So now, barring botched or unsubmitted paperwork, the sudden discovery of too-early release dates or TV airings, or any other of the disqualifications that are always possible when dealing with AMPAS rules, we have 17 qualifying films:

“Astro Boy”
“Battle for Terra”
“Cloudy With a Chance of Meatballs”
“Coraline”
“Disney’s A Christmas Carol”
“Fantastic Mr. Fox”
“Ice Age: Dawn of the Dinosaurs”
“Mary and Max”
“The Missing Lynx”
“Monsters Vs. Aliens”
“9”
“Planet 51”
“Ponyo”
“The Princess and the Frog”
“Tinker Bell and the Lost Treasure”
“A Town Called Panic”
“Up”