A salacious cover of the New York Post shows potential First Lady Melania Trump in all her naked glory two decades ago.

The Post uncovered 1995 photos of the then-Melania Knauss stripped down to her birthday suit for a now-defunct French men’s magazine. There’s nothing but high heels, a bracelet-decorated wrist, sling-back shoes and a purse-lipped pout to distract the viewer from the front, back and side snaps of the long-legged, bare-skinned Slovenian model.

The move is the latest in a series of public humiliations for the aspiring First Lady. Her speech at the Republican National Convention was found to contain phrases lifted from Michelle Obama’s speech in 2008. And her website was taken down last week after media pointed out that it cited a false claim of her completing a college degree.

The photog that shot the provocative images, Alé de Basseville told The Post that he used the Renaissance and the “celebration of the female body” as his inspiration. “I think it is important to show the beauty and the freedom of the woman, and I am very proud of these pictures because they celebrate Melania’s beauty,” he said. 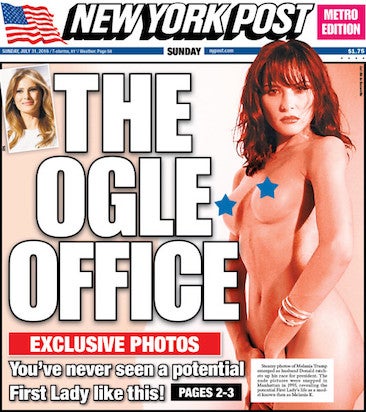 It’s not clear whether Trump was as thrilled that the images were re-released just as he faces a pitched battle for the presidency where his core supporters are conservative.

Trump told The Post, “Melania was one of the most successful models and she did many photo shoots, including for covers and major magazines. This was a picture taken for a European magazine prior to my knowing Melania. In Europe, pictures like this are very fashionable and common.”

The nude Melania has unleashed a flood of comments on social media, ranging from those who are all for the baring of a beautiful body to those who call it further proof of  her husband’s unfitness for office of the Presidency.

Also Read: Only 17 People Showed Up to a 'Women Vote Trump' Rally

The publication Crossing the Line interviewed “dozens of women” who have worked for the presidential candidate over the past 40 years, conducting 50 interviews over the span of six weeks. Their accounts revealed Trump’s derogatory nicknames, negative comments on appearances and inappropriate interactions between him and many women he worked with, according to the report.

Trump denied most of the allegations in a New York Times story except one, and has previously described himself as a “champion of women,” claiming that “nobody respects women more” than he does.