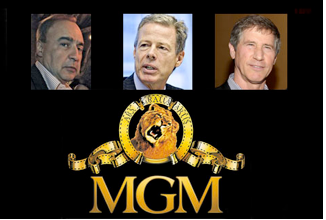 The three bidders were known to be Time-Warner, Lions Gate Entertainment and a Hollywood newcomer, Access Industries.

Of the three, Time-Warner bid the last – late Monday afternoon – and submitted an all-cash offer of $1.5 billion, according to one knowledgeable individual.

The strength of that bid indicated Time-Warner’s fervent desire to acquire the studio, with its 4,100-title library, which includes the lucrative James Bond franchise and half of the epic project, "The Hobbit" (Time-Warner already owns the other half.)

But it was not clear that even an offer like that, or higher, would satisfy MGM’s lenders, who preside over $3.7 billion in debt. They had been seeking $2 billion for the studio. With the debt trading at about 60 cents, the company was still worth on paper more than $2 billion.

But potential buyers were stymied at justifying that pricey a value for MGM, in a climate where declining DVD sales has undermined the value of MGM’s vast library.

None of the bidders would comment, but MGM issued a statement late Monday afternoon acknowledging having received "a number of bids."

Clearly the studio would not be in a hurry to respond to those bids. In the same statement, MGM said that it was seeking to extend a March 31 deadline of forbearance on interest payment from debtors, along with "a forbearance agreement for its revolving line of credit, for which a payment is due April 8."

So finally MGM has some options, while potential buyers will have to wait weeks for a decision.

MGM issued a statement acknowledging receipt of an unspecified "number of bids" to buy the studio, three days after its formal deadline passed for those bids.

Lionsgate and Access Industries submitted their bids, and Time-Warner submitted its offer on Monday afternoon, according to knowledgeable individuals.

The Time-Warner bid came in at the high end of its planned offer — an all-cash bid of $1.5 billion, according to one individual close to the deal.

Meanwhile, MGM also announced that it expects to extend the looming interest deadline with lenders beyond March 31.

The studio, which carries $3.7 billion in debt, has negotiated deferred interest payments multiple times with its debtors, and clearly needs to do so again.

In a news release Monday afternoon the studio said:

“MGM said today it has received a number of bids as part of its ongoing process of exploring strategic alternatives, which include continuing to operate as a standalone entity and evaluating a potential sale of the Company.

"The Company will review the bids and related transaction terms over the next several weeks.

"As part of its efforts to strengthen its financial position and to facilitate the Company’s strategic review process, MGM also said today it expects to work with its lenders to extend the current forbearance period on its bank debt, which ends March 31, 2010. The Company also expects to seek a forbearance agreement for its revolving line of credit, for which a payment is due April 8. MGM appreciates the strong support it has received from its lenders throughout this process.”

Lionsgate and Len Blavatnik’s Access Industries have bid, and Time-Warner still has not, an insider confirms.

This from Reuters on Monday:

Latest appears to be that Lionsgate and Len Blavatnik’s Access Industries have bid, and Time-Warner still has not.

Here’s their story, which I’ll be augmenting as soon as I have more insight:

The Friday deadline for a second round of bids for MGM was unofficially extended after Time Warner, the most likely buyer for the famed studio, did not immediately put in a bid, sources familiar with the matter said.

A shroud of silence remained in place among bidders and biddees in the MGM sale by Sunday afternoon.

It was clear that the deadline of last Friday had gone soft, as MGM waited to take in the bids they’d expected from Time-Warner, Access Industries and Lionsgate.

One insider in the deal said that there would be no news on the sale until Monday.

I interpret that to mean that they still have no bids submitted, which is not a good sign.

This is now a game of chicken.

The longer this drags on, the lower the bids can be expected to be. That is, if all the bids come in – which is not guaranteed.

By Saturday March 20, none of the bidders for MGM would confirm whether they had submitted offers for the studio up for sale, despite the passing of MGM’s Friday deadline.

The silence suggested that the deadline might have been somewhat slippery, and that MGM may well be permitting its reduced number of suitors to take more time to submit.

By Friday evening it was still unclear whether the three bidders had submitted their offers for MGM, although all three were expected to do so before the deadline at the end of the day.

More as soon as we hear news….

The clock ticked down on Thursday night toward the deadline for second and final bids on MGM, and only three suitors remained.

And of those three, Time Warner remains the strongest candidate to close the deal.