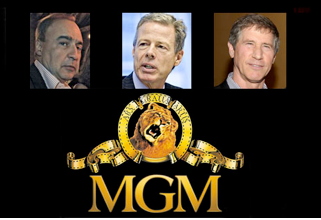 Update Saturday at 9 am:

None of the bidders or MGM would confirm whether bids had been submitted for the studio up for sale, despite the passing of MGM’s Friday deadline.

The silence suggested that the deadline might have been somewhat slippery, and that MGM may well be permitting its reduced number of suitors to take more time to submit (see below).

By Friday evening it was still unclear whether the three bidders had submitted their offers for MGM, although all three were expected to do so before the deadline at the end of the day.

More as soon as we hear news….

The clock ticked down on Thursday night toward the deadline for second and final bids on MGM, and only three suitors remained.

And of those three, Time Warner remains the strongest candidate to close the deal.

And CEO Jeff Bewkes was set to meet with Warner chiefs Barry Meyer and Alan Horn on Friday to decide on a price.

The range, as we’ve reported before is expected to be low: $1.2 billion to $1.4 billion at the most. And we know that MGM has sought $2 billion; with its debt currently trading at 60 cents on the dollar, that gives the company a value of more than $2 billion.

So a low Time Warner bid may not be incentive enough to trigger a sale.

In second and third position stand Lev Blavatnik’s Access Industries and Lionsgate, the latter a reluctant party who is not at all certain to bid by tomorrow.

Said an individual inside the camp of one bidder: “Information flow ridiculously slow … (This is) Not a fun process.”

And this is part of the pressure on Bewkes. Every major studio is salivating not so much over the 4,000-title library, but over the James Bond library and franchise and the half of “The Hobbit” not already owned by Warner.

Although the Bond franchise is only a distribution deal for MGM, it still represents major value – and could be the reason that this deal is driven into the billions. (Many forget that the remake rights are retained by the Broccoli family.)

“The MGM library is worth in the mid-hundreds of millions of dollars, and that’s pushing the value,” said Seth Willenson, an entertainment industry consultant whose expertise is in valuing movie libraries.

“There’s no doubt in my mind that a bunch of well-intentioned, highly educated analysts are going to overpay for MGM, and the consequences are going to be borne by bond and shareholders.” (Read full interview with Willenson here.)

So how much? Enough to get the sale done, not so much that the deal can’t be justified.

In the wake of the AOL debacle, Bewkes cannot be seen overpaying for another choice property, or Wall Street will come down on his stock like the Kraken. (Disney’s Bob Iger took plenty of heat over laying out $4 billion for Marvel.)

But at the same time, Bewkes does not want to be seen losing this auction to the likes of a Russian-born billionaire and Hollywood naif. Blavatnik can afford to pay $2 billion. But would he?

Meanwhile most experts, includig Willenson, think Time Warner is best situated among the bidders to create shareholder value out of MGM’s assets.

“There’s no question that Time Warner could monetize it the best,” he said.  “A library is worth what you want it to be worth. If you have a vision in terms of what you’re going to do with the library, then you can overpay, knowing what that vision will be…I think Time Warner has gone through a lot of businesses that are based on creation of motion pictures."

At this point, it’s Bewkes’ to win – or lose. It’s a tricky game for him, and will involve his personal prestige.

Which means that it’s entirely possible that a sale does not happen.

“I think it will be a failed sale process,” said one observer, a veteran of Wall Street’s debt business and a principal in other Hollywood selling sprees. “My personal view is that no one’s going to get it.”