“The Pentaverate” asks: What if a secret society of five men has been working to influence world events for the greater good since the Black Plague of 1347?

At the beginning of the streaming series, one unlikely Canadian journalist (we’re going to go out on a limb here and guess that’s one of Myers’ seven characters — he’s certainly Canadian) finds himself embroiled in a mission to uncover the truth and possibly save the world himself.

A final reminder for that character, straight from Netflix’s logline: Remember, the Pentaverate must never be exposed!

This part is admittedly just a guess, but comedically, it would make sense for Myers to play all five members of the Pentaverate. If we’re correct about that, and about Myers as the journalist, that would leave one more character of his seven. 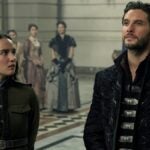 Of course, that’s all just a guess at this point. What we do know for sure is who’s co-starring in this thing alongside Myers: Ken Jeong, Keegan-Michael Key, Debi Mazar, Richard McCabe, Jennifer Saunders and Lydia West.

McCabe, Saunders and West are all British. Jeong, Key and Mazar are American. And that marks the end of our light-lifting investigation into the Canadian journalist role.

For the record, we did ask Netflix about our theory. All a spokesperson for the service and series would say is, “He’ll be playing a mix of characters.”

Other executive producers include John Lyons, Tony Hernandez and Lilly Burns for Jax Media, as well as Jason Weinberg.