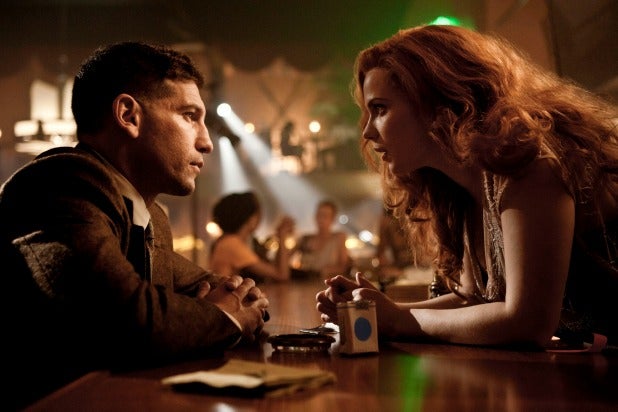 Fans of Frank Darabont‘s former show, “The Walking Dead” like to defend its recent dull moments by saying it just has a slow pace. They should check out Darabont’s new limited-run series, “Mob City,” to see how a show can burn slowly and brightly at once.

It may feel like not much happens on “Mob City” – until you realize how much you’ve missed. The blind spot is a classic noir motif, and viewers watching “Mob City” have lots of them. The show’s pace feels like Darabont giving us a sporting chance of spotting clues we’ll probably miss anyway.

The setting is 1947 Los Angeles, where Hollywood glitz meets gangland slayings. The first two episodes, which air Wednesday, also flashback to the 1920s setting of “Boardwalk Empire.” The show airs two more back-to-back episodes for each of the next two weeks.

Darabont wrote and directed the first two episodes, and the “Shawshank Redemption” writer hasn’t lost his wit with his return to TV. He’s also happily reunited with Jon Bernthal, even better here than he was as the skulking Shane on “The Walking Dead.” As a morally ambiguous L.A. cop, he’s a joy to watch.

So is pretty much everyone. Ed Burns makes a great Bugsy (sorry, he hates that name) Siegel, a gangster with movie-star looks. Neal McDonough‘s golden boy appeal is perfect for his role as future L.A. police chief (and Parker Center namesake) William Parker.

But the breakout star is Alexa Davalos, a veteran of Darabont’s 2007 “The Mist. She plays femme fatale Jasmine Fontaine, a shutterbug with neon lights outside her darkroom. The show’s second episode belongs largely to her, and she channels 1940s glamour down to the jaded transatlantic accent.

We’ve seen these characters before: the charming gangster, the loner with the dubious moral center, the incorruptible cop. They’ve aged well. Our familiarity with these types and their real-life inspirations make it easy to get comfortable with “Mob City” quickly. So does the Art Deco backdrop. The more it embraces the “Dick Tracy” brightness, the prettier its palate.

Set right between “Boardwalk” and “Mad Men,” it isn’t quite beautiful as either – but it does have by far the best cars. This is Los Angeles, after all.

It also lacks the snap of either period show, so far. Not every slow moment feels essential. But in two episodes, the show caught me completely off-guard twice. There’s no question Darabont knows what he’s doing.