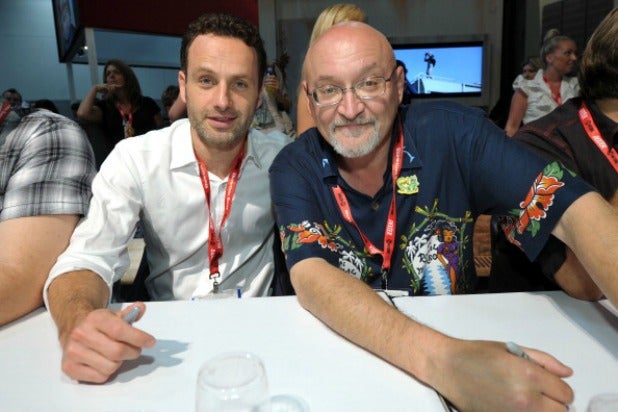 Outsted “Walking Dead” showrunner Frank Darabont says he hasn’t seen an episode of the zombie drama since he left.

The show had AMC’s highest ratings when it debuted in 2010, and has since become the top-rated scripted show on TV. The magazine reported that AMC cut its budget by $500,000 per episode in Season 2. Darabont parted ways with the show in July 2011 after months of fighting with the network.

“Look, I really haven’t spoken of this yet — I will, I’ll get there — but I had to take some time off after that to really reassess everything, to really get over the emotional devastation of having some truly malevolent people tear asunder a brilliant family that had gathered to create this hit for them,” said Darabont (pictured with “Walking Dead” star Andrew Lincoln, just before his firing).

Also read: ‘Walking Dead': Is The Governor the Walter White of the Zombie Apocalypse?

“When somebody throws a hand-grenade into that situation, it’s tremendously emotionally trying,” he added.

The show is on its second showrunner since Darabont left. Scott Gimple replaced Glen Mazzara, who replaced Darabont.