Last time, you may remember, we brought you the secret deposition of Terri Mial, the whistleblower whose job it was to administer residual and foreign levy payments. Mial testified that she was instructed not to pay out the checks that came in, and to shred the check lists.

He reveals here that there are approximately 5,000 people whose money the guild has, and who are mostly not members of the guild.(Don’t ask for this to make sense. It just is.) 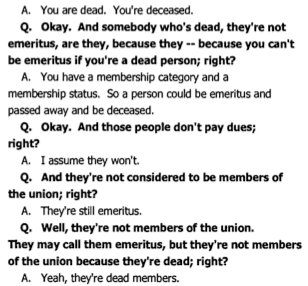 We have otherwise learned that this amounts to about $30 million of other peoples’ money sitting around.

Here are a few of the many interesting , and sometimes testy exchanges between Gor and plaintiff’s lawyer Neville Johnson which, among other things, clarifies that even if you are dead, you remain a member of the Writers Guild. (I could never make that up. It’s in black and white.)

Here are answers to some simple questions that reporters such as myself have been unable to get for a few years now. Johnson asks the number of people who are entitled to foreign levies who the WGA can’t find.

Approximately about more than 5,000 people – names.

And how many of these are members?

I don’t have the exact breakdown, but I want to say less than 20 to 25 percent are members.

Johnson asks for a listing. The guild lawyer prevents Gor from answering.

What’s the reason you don’t want to provide a listing of the people you can’t find?

…The first objection is that it’s burdensome.

Why collect  the money of nonmembers?

We collect money for all writers through the collection societies and once we get the titles we identify who we need to pay.

This gets asked many different ways, always with the same answer. Eventually the exchange gets testy between lawyers:

Johnson: Listen, I’m allowed to ask this witness any questions that relate to his testimony, including his veractiy, believability, and whether or not he’s been influenced. Ok?

Leheny: Take it up with the court

Johnson: So you’re refusing to allow him to answer that?

Johnson: And the reason is?

Knowing that the Department of Labor has been investigating the issues of foreing levies, Johnson asks repeatedly whether Gor has been questioned by government atuhorities. His attorney stops him from answering every time.

Among the things we learn is that even if you’re dead, you remain a member of the Writers Guild. (p 124)

A person could be emeritus and passed away and be deceased.

I assume they won’t.

And they’re not considered to be members of the union, right?

Well… they’re not members of the union because they’re dead, right?

Read it for yourself, the full testimony is posted here: