Longtime Variety columnist Army Archerd, whose “Just for Variety” column was a must-read in the golden era of Hollywood celebrity, has died at the age of 87. 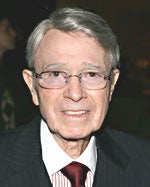 A spokeswoman for Archerd said he died at UCLA Medical Center after a bout with mesothelioma, a lung cancer closely associated with asbestos exposure.

In an obituary published Tuesday, Variety editor Timothy Gray noted that Archerd, “was known for being fair, quoting people accurately and being generally upbeat — which, in the latter part of the 20th century, became increasingly rare for an entertainment reporter.”

A UCLA grad and former Associated Press reporter, Archerd was hired by Variety in 1953 to replace columnist Sheilah Graham.

Detailing the goings-on of Hollywood culture in a star-friendly style and tone, Archerd’s 900-word column, punctuated by short briefs, quickly became the place for celebrities in the 1950s and ’60s to update their latest moves and career turns.

In 2005, veteran "Tonight Show" publicist Charlie Barrett told Variety that before celebrating his 25th anniversary on NBC in 1987, Johnny Carson told Barrett: "I'm not doing any interviews, because if I do one, I'll have to do them all. But if Army calls, I'll speak to him."

"An item in Army's column was more important than a full-fledged story, because the first thing that everybody of any substance in this business does in the morning is read Army Archerd," fellow former reporter-turned-publicist Dale Olson said.

He also had sway over those he wrote about. In 1995, when Michael Jackson released the album "HIStory," Archerd — who was Jewish — criticized Jackson for a song in which he used the anti-Semitic lyrics  "Jew me/Sue me" and "Kike me," Variety reported.

One of the first journalists to have a star on the Hollywood Walk of Fame, Archerd was also a popular figure in Hollywood society, often hosting parties at his home that stars like Gregory Peck, Jack Lemmon, Kirk Douglas and Elizabeth Taylor would frequent.

A career highlight came in 1985, when he reported that actor Rock Hudson was being treated for AIDS, which at the time was a secret.

Born in the Bronx on Jan. 13, 1922, Archerd served in the Navy during World War II, positioned as a deck officer on a destroyer in the Pacific. Variety reports that he later told colleagues that he served alongside writer Herman Wouk, and that he suspected that some of his own foul-ups inspired a chapter in the Wouk’s “The Caine Mutiny.”

His doctors also suspect that his ultimately fatal asbestos exposure occurred during his Naval service.

Archerd’s column was retired in 2005, although he continued to work in the Variety offices until late July – and learned how to join the digital revolution as a blogger well into his 80s.

He is survived by his wife, actress Selma Archerd; a son Evan; two stepsons and five grandchildren. A daughter, Amanda, died in 2008.