When the first round of fall film festivals wrapped up over the weekend, the Oscar picture was supposed to have been cleared up considerably. 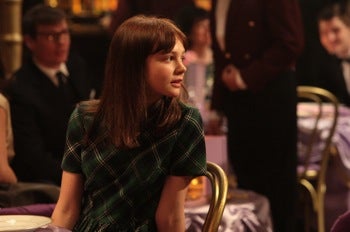 We learned the answers to some questions about the Oscar race at Telluride, Venice and Toronto. We learned, for instance, that Carey Mulligan, left, is indeed a formidable best-actress contender in “An Education.” (Photo: Kerry Brown/Sony Pictures Classics)

But we also learned that we don’t know the answers to many other questions, some of them pretty crucial.

Here, then, is my take on What We Learned at the Festivals:

1) “Up in the Air” is a genuine contender. Jason Reitman’s movie came into the festivals with perhaps the biggest buzz and greatest expectations, and with few exceptions it won over fans and critics and secured its position as a sure best-picture contender … and maybe even that dreaded target, the Frontrunner.

2) “Precious” is for real, too. The audience winner at Sundance, now the audience winner at Toronto, recipient of a big boost (and several shows worth of free promotion) from Oprah Winfrey – Lee Daniels’ film seems to pack a big enough emotional wallop to find itself in the thick of the race.

3) “A Serious Man” is still a serious question mark. Coming into Toronto, the Coen Brothers film seemed too slight, too jokey to be a real contender. The early reviews didn’t change that impression … and then, all of a sudden, enough people started swooning and saying it was the year’s best picture to give it real awards credibility.

Its reception at the boxoffice and within the Academy will tell the tale – and let’s face it, while it might be too Jewish to play well in middle America, it can hardly be too Jewish for the Academy.

4) The field is full of problematic movies that wouldn’t be in the running if it weren't for those five extra best-picture nominations up for grabs. In a normal year, would movies like “A Single Man” and “The Road” and “Bright Star” have serious shots? Maybe not. This year? They sure do.

5) At film festivals, great performances in little movies can look like sure awards contenders … Robert Duvall in “Get Low,” Annette Bening in “Mother and Child,” Viggo Mortensen in “The Road,” Colin Firth in “A Single Man,” Abbie Cornish in “Bright Star,” Carey Mulligan in “An Education” … They’re all brilliant (I can only vouch for Mortensen, Cornish and Mulligan, but that’s what I hear about the others, too), and they all ought to be in the thick of the race.

6) … but once those festivals end, you need an extra boost to keep up the momentum.   Academy voters, after all, seem almost contractually obligated to fill the acting categories with a handful of performances from big stars in big-studio movies, squeezing out some of the indies.

Take last year’s best-actress race: Melissa Leo got a nomination for “Frozen River,” but Sally Hawkins in “Happy-Go-Lucky” and Kristin Scott Thomas in “I’ve Loved You So Long” were squeezed out by Angelina Jolie in “Changeling” and Meryl Streep in “Doubt.”   This year, Streep’s a lock again, “Precious” may well have the clout to make Gabourey Sidibe a contender, Mulligan does seem unstoppable, two-time winner Hilary Swank is on the horizon, and suddenly spaces are getting tight.

7) The economy, and the woeful state of independent film finances, will have an impact on the race. “Get Low” was just plucked out of limbo by Sony Pictures Classics – but other possible contenders, including “Mother and Child,” still don’t have distribution. If that film doesn’t get picked up by a company with the money to give it a 2009 release and pay for some kind of Oscar push, Annette Bening could be on the sidelines instead of the red carpet.

8) The festivals screened lots of films, and maybe they even showcased the eventual best-picture winner – but they didn’t show the movies that’ll determine the success of the expanded best-picture roster. It’s not film festival fare that’ll make people watch the Oscars. It’s “Titanic” and “The Return of the King” … and maybe “Avatar,” if it’s great and if it’s a hit. Venice, Telluride and Toronto can showcase lots of terrific movies, but they can’t fill those 10 slots in a way that’ll attract viewers, draw new fans or make the Academy’s experiment pay off.

For that, Oscar needs multiplex movies, not festival movies.