The Screen Actors Guild Awards gave momentum back to “Precious,” confirmed that “Inglourious Basterds” is a bona-fide awards movie, and kept “Up in the Air” on track, though not without a little hiccup.

Announced on Thursday morning in a theater at the Pacific Design Center in West Hollywood, the SAG nominations didn’t catapult many dark horses into contention, or snub many front-runners; in fact, in the lead male actor and lead female actor categories, the nominees matched up perfectly with what many have been predicting will be the eventual Oscar nominees: Bridges, Clooney, Firth, Freeman and Renner on one side, Bullock, Mirren, Mulligan, Sidibe and Streep on the other. 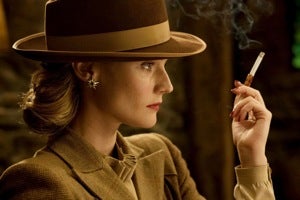 In the supporting categories, though, the randomly -selected 2,100 members of the SAG nominating committee overlooked a few favorites (Alfred Molina in “An Education,” Julianne Moore in “A Single Man”) in favor of Woody Harrelson in “The Messenger” and Diane Kruger in “Inglorious Basterds” (left). the latter being one of the three films that picked up a trio of nominations (out of five categories).

While some had predicted an ensemble-cast nomination for a long-shot film like “The Messenger” or “In the Loop,” the SAG voters played it fairly safe in their biggest category, honoring “An Education,” “The Hurt Locker,” “Inglourious Basterds,” “Nine” and “Precious.”

Curiously, they left out “Up in the Air,” the only film to land three nominations (one for lead actor, two for supporting actress) without an ensemble nomination.

The nominations for “Nine” and “Basterds” continued a very good week for the Weinstein Company, which followed its 12 Golden Globe nominations with six SAG nods, tying it with Paramount for tops among studios.

And Weinstein partisans were clearly in a mood to celebrate: in the room when Michele Monaghan and Chris O’Donnell read the nominees, the biggest reaction consistently came for the Weinstein films, particularly “Basterds” and “Nine.”

(The reaction also came not from the press sitting towards the front of the theater, but from the back rows, which are traditionally occupied by publicists.)

Among individual performers, the heartiest applause was reserved for Sandra Bullock, whose Female Actor in a Leading Role nomination secures her spot as a solid Oscar contender for what originally seemed to be an unlikely film, “The Blind Side.”

While it might be tempting to look at the results and make Oscar predictions, since the actors branch is by far the largest branch of the Academy, the voting bodies are dramatically different. The SAG nominating committee, after all, is randomly chosen from among the 100,000 SAG members, as committee member Howard Stern reminded everybody when he riffed on his show a couple of weeks ago about how he planned to vote for people who’d appeared on his show.

The 16th annual Screen Actors Guild awards will be presented Saturday, January 23, at the Shrine Auditorium in Los Angeles, and aired live on TNT and TBS.