Guild whistleblower Terri Mial testified in December 2006 about the Writers Guild of America sitting on residual and foreign levy money belonging to both members and non-members.

I posted a few days ago on the first section of that testimony. Here, at last, is the full testimony, all 77 pages. And here are the other explosive excerpts:

“I voiced serious, heavy concerns … that both living and deceased writers and their beneficiaries had not been paid,” Mial testified.

“My basic concern was just, Why did this happen?”

In Mial’s deposition questioning by the plaintiff’s lawyer Neville Johnson, she describes shredding lists of checks that were not being cashed, because the guild had no storage space. 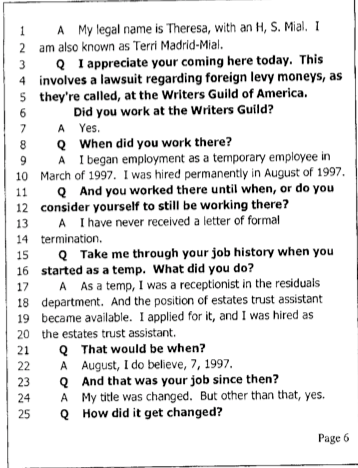 "Were you ever told to destroy documents?"

"There were a few that, after a certain period of time, like six months, we would keep certain records for six months, and after six months we shredded them."

"What kind of records are we talking about?"

"… Oh boy. Batch sheets. When checks come in, they’re batched, and each check is listed."

"Who told you to destroy those batches?"

"All of your supervisors that you have indicated?" (Mary Devlin, Don Gor)

"Well, it was just a matter of procedure … That was just something that was a part of the job. I mean, we didn’t have storage space to store all of these things."

"Are they on computer somewhere, this batch of checks as they came in? You have the printouts you say you destroyed. Otherwise, is there a record of these checks, do you know?"

"They’re listed under each writer, in the computer." 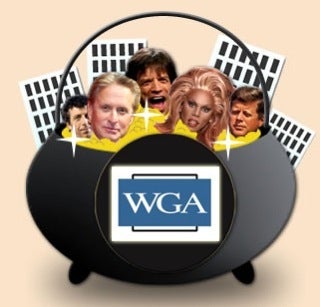 Mial worked at the WGA for 10 years and was the estates trust manager, in charge of dispensing residuals and foreign levy payments.

She was fired in the wake of continual complaints about nonpayment of these checks but unrelated to those complaints. Instead, the guild terminated Mial for allegedly making a threat against one of her colleagues.

She has since accepted a reported six-figure settlement from the guild. She testified that she believes her termination was retaliation for being a whistleblower.

The guilds are studiously silent about all matters involving moneys they have not been paid to the copyright holders and their heirs — the screenwriters, directors and actors who have had incremental checks arriving over the years gone undelivered.

A WGA spokesman declined to comment on this testimony, saying the guild does not comment on pending litigation.

Paul Kiesel, who is class counsel on this lawsuit, gave me an update last week on the proceedings. “Settlement discussions are ongoing,” he said, saying serious talks have been going on for about a year and are likely to continue for some time.
Bill Richert, who is a lead plaintiff in the lawsuit, rejected a proposed settlement last year.

I asked Kiesel about Mial’s testimony, and his answer surprised me.

“I know nothing about her,” he said. “The WGA lawsuit involves a simple issue: They collected residuals for members and nonmembers that they have failed to distribute. The money needs to go back to the membership. How that issue was brought to the table is not of consequence to me. By the time I got into this, there has been recognition that residuals need to be returned.

So one of the leading lawyers on this class action lawsuit professes to know nothing of the central whistleblower in the case.

I asked why that would be. Kiesel said, “I don’t know. It’s not been something I’ve been focused on."

PREVIOUSLY: Does SAG Have Your Money? $25 Million in Unclaimed Cash