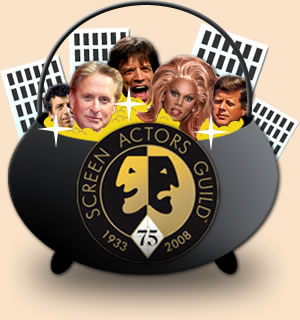 When WaxWord prompts unresponsive organizations to change their ways, we have to tell you. Our investigation of unclaimed residuals at SAG in September has had an amazing result. The guild, apropos of nothing, has launched a campaign to reunite $25 million in “unclaimed residuals” with its proper owners. The list which we posted online at the time, includes the likes of Michael Douglas, Mick Jagger, Eric Bogosian, Clark Gable, Myrna Loy, Tallulah Bankhead and even former SAG Charlton Heston. Many of those on the list, it should be noted, are not members of SAG at all. They include former president John F. Kennedy, and his brother Senator Teddy Kennedy.

In radio and print ads, and in an appeal in the monthly SAG publication (see graphic), the guild is suddenly reaching out to find those people. A month ago, its representatives told me that the 66,000 people on this list could not be found or were otherwise impossible to reach. Those arguments were specious on their face, and now the guild has turned 180 degrees to make a concerted effort to find the people it just said it was already trying hard to find. At the time, the guild said it had “full-time staff” devoted to seeking then out. Should we therefore fail to believe the guild when we ask them questions on the record, and they respond on the record? This should give us all pause, because this is not the end of the story. I promised at the time that this was merely Part I, and Part II will be coming down the road. There is more to this morass, as many of you might imagine. It will be instructive to hold the guild to account in learning how much money they succeed in distributing.
Variety’s Dave McNary had the story of this out-of-the-blue campaign today (many of you know I’ve been on the road, and won’t be posting as much, as my new book, “Loot,” has just launched). I was truly disappointed that McNary did not note that WaxWord broke this story. No one else in the  Hollywood press has so much as mentioned the issue, until today.
This is another good reason to read WaxWord, and to support our larger endeavor launching in January, The Wrap News, for independent, aggressive and accurate reporting.