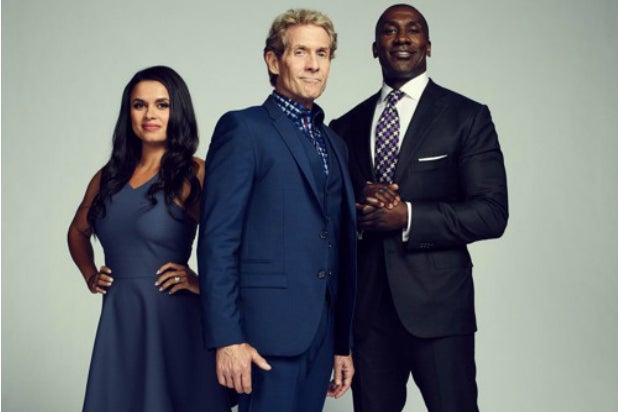 Tuesday’s premiere of Skip Bayless’ new debate show delivered a .10 overnight Nielsen rating, which is a 400 percent improvement over the same time period last year. Back then, the Fox-owned cable channel received a .02, running repeats of live events and studio shows.

Additionally, the premiere’s preliminary TV ratings were 233 percent better than the channel’s August 2016 average (a .03), when FS1 aired similar filler.

Plus, Bayless and Shannon Sharpe now offer a legitimate lead-in for Colin Cowherd’s “The Herd.” Also with a .10 rating, that show’s Tuesday episode was up 67 percent over its September 2015 average (.06).

Earlier, TheWrap compared “Undisputed’s” premiere ratings versus the same day’s “First Take” on ESPN2, where Bayless embraced debate for 12 years. It really wasn’t much of a battle, however, as the Stephen A. Smith-Max Kellerman morning show trounced “Undisputed” by 320 percent. We didn’t have Fox Sports’ historical comparisons at the time of that initial post.

To be fair to Bayless and Fox Sports, ESPN calls itself the Worldwide Leader in Sports for a reason — it is still far bigger than the competition, with greater reach and recognition. Final numbers for both series should be officially released tomorrow.

At Fox Sports 1, Bayless is reunited with buddy and boss Jamie Horowitz, another ESPN alum. The former Dallas Morning News columnist sits opposite NFL Hall of Famer Shannon Sharpe on the new show.

TheWrap recently spoke with Bayless, who revealed to us that “First Take” was nearly canceled over a 2013 incident involving him and NFL All-Pro Richard Sherman. He also compared and contrasted his old show with his new one, and swore up and down that his polarizing answers are not a masked effort to troll the audience.