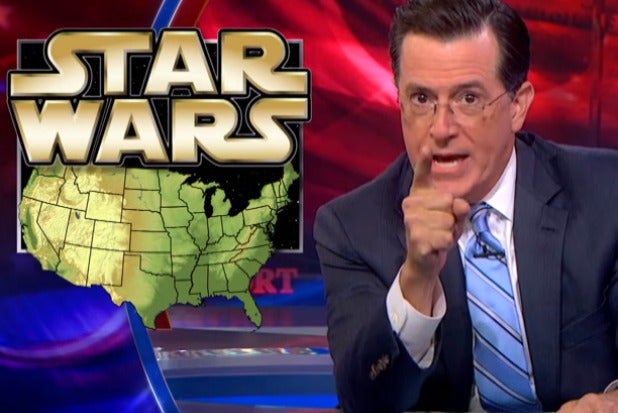 Stephen Colbert endorsed Darth Vader for president Thursday — but only after mocking the kind of journalism that leads to imagining a President Vader.

Colbert noted that statistician Nate Silver — who accurately predicted the outcome of every state’s vote in the 2o12 presidential election for the New York Times — has taken his FiveThirtyEight blog to ESPN, where it recently polled 1,186 respondents about “Star Wars.” The poll found that “The Empire Strikes Back” is the most popular of the films, and that Luke Skywalker had the highest favorability of all the “Star Wars” characters.

“Nate Silver is now officially in a galaxy far, far away from journalism,” said Colbert, who also described the numbers wizard as a “statistical savant” and the “cockiest guy in your fantasy football league.”

The Washington Post’s Wonkblog went further than Silver, comparing his “Star Wars” poll with recent political polls to conclude that Vader is one of many “Star Wars” characters with higher favorability ratings than the current field of potential presidential candidates.

“This is shocking. A group of broadly sketched, outlandish, unbelievable characters are less popular than the people from ‘Star Wars,'” Colbert said.

He also noted that “Star Wars” politician Admiral Palpatine (a senator before he was an admiral) outpolls real-life Florida Sen. Marco Rubio.

“Many people expected Palpatine to do better against the Florida senator,” Colbert said. “But remember, in Florida they’re suspicious of anyone wearing a hoodie.”

Colbert questioned the validity of crossing the results of multiple polls, but finally decided the Washington Post was onto something.

“Based on these results I am now officially endorsing Darth Vader for president of the United States,” he said. “Folks, let’s face it: The electorate is becoming more and more diverse, and there’s no question he is a strong black candidate.”