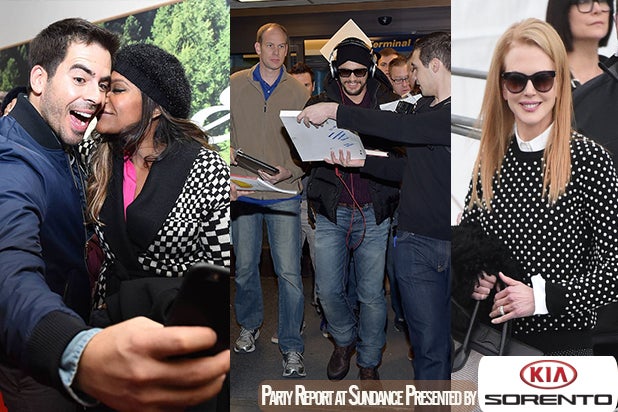 Eli Roth and Mindy Kaling, James Franco is in his own world, and Nicole Kidman cuts through the crowds on Friday.

Director Eli Roth rolled into Sundance Film Festival hotspot TAO with about +23 (we lost count), while real “Entourage” guy Adrian Grenier talked about a sequel to the film while staying true to his “Aquaman” roots and promoting his “Lonely Whale” documentary project.

Here is what is happening outside the screenings and behind the ropes in Park City, Utah.

“The Bronze”: Hayley Lu Richardson and Gary Cole toast “The Bronze” at the Kia Supper Suite by STK on Friday night. (Celeb Daily)

A day after capturing the opening-night buzz over John Legend and Robert Redford, Melissa Rauch’s loser-gymnast comedy “The Bronze” celebrated on Friday night. Rauch, perched by the entrance for easy greeting, headlined the “Kia Supper Suite by STK,” which is taking over the Handle restaurant on Heber this weekend.

Eli Roth, in town to premiere his “Knock,Knock,” was one of the few lucky ones who had his call answered on Friday night.

As people packed six or seven deep to try to snag hosts [name redacted to prevent more shouting] attention to gain access to the smaller and more intimate TAO, Roth had no issue. He arrived with about 23 people on his tail around 2:20 a.m.

He came on at 12:50 a.m., spinning for Kellan Lutz, Zoe Kravitz, Zach Quinto, and Skrillex, who came over from his own show. (Mikey Glazer)

DJ Vice, costumed up in a ski hat and duck boots to DJ, was midset. Jermaine Dupri and LA’s DJ Spider made stops in th booth with David Arquette as an unannounced backup dancer. Noah Tepperberg held down the middle table in an expanded roped-off VIP area inside at the Elyx sponsored series that continues through Sunday.

Meanwhile, Roth’s “Knock Knock” lead Keanu Reeves peeked his head in, looked around and then turned back toward the front.

Stylist Ilaria Urbinati has always had coattails, now she has coats.

Eric Ray Davidson, WME agent Brandon Liebman (who shares Armie Hammer as a mutual client with Urbinatir) and the designer on Friday night.

Fresh off winning the “Menswear Stylist of the Year” award at the Fashion Los Angeles Awards the Sunset Tower on Thursday night, stylist Ilaria Urbinati gathered a few intimates, including Roth, in the back of the Eddie Bauer space on Main to celebrate her new line with the brand early on Friday.

It’s a family affair. Her husband, highly regarded fashion photographer Eric Ray Davidson, shot the look book. He was there in what he told TheWrap was a quick 24-hour in-and-out in Park City.

Urbinati client and pal James Marsden stayed as long as he could before having to head to his own “D-Train” premiere, while “Walking Dead” duo Andrew Lincoln and Norman Reedus had heads turning.

The one-time on-screen wrestler gained real-life ring legends Jake “The Snake” Roberts, Diamond Dallas Page and Scott Hall (all-time NWO bad guy) at TheWrap’s Interview Studio inside the Indiegogo Lounge on Friday. Neither had any idea the other was in town and shared the rare, genuine “celeb-meeting-celeb” mutual-admiration huddle.

TheWrap’s Party Report at Sundance is presented by the vehicles that are driving filmmakers to special events, the Kia Supper Suite and TheWrap’s Interview Studio at the Indiegogo Lounge at the festival, the all-new Kia Sorento.