“The Matrix Resurrections” is one of the most playful and meta big budget sequels in recent memory. This is a sequel (that once again stars Keanu Reeves and Carrie-Anne Moss) that openly discusses the roles of sequels, investigates the nature of returning to a somewhat depleted well, and generally thumbs its nose at what is both expected and demanded of this type of long gap legacy sequel. And it does so in the most “Matrix”-y way possible, of course, utilizing the series’ patented combination of flowery philosophizing and bone-crunching action set pieces.

But if there’s one trapping that it can’t get away from, it’s the post-credits scene. This has become a staple of big budget franchise filmmaking, initially introduced as a sort of throwaway gag in 2008’s “Iron Man” and now an innate part of these movies’ appeal. (And not just Marvel Studios movies; “Ghostbusters: Afterlife” had two meaty scenes – a mid-credits and a post-credits sequence.) Even if there isn’t a “Matrix Resurrections” post-credits sequence, you’re probably going to sit there in rapt anticipation anyway. Because years of Marvel movies have trained you to.

The question is: will you be rewarded for your patience? Or emerge enraged? 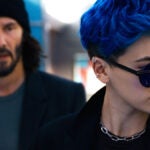 The short answer is that, yes, there is a post-credits sequence at the end of “The Matrix Resurrections.” (There is not a mid-credits sequence for those who are curious.) If you sit and read the names of all the hardworking performers, technicians, and artisans that made “The Matrix Resurrections,” you will be rewarded with a little bonus scene. (Hopefully you didn’t order the jumbo Coca-Cola from the concession stand.) But yes, there is a post-credits scene.

Should You Wait for It?

This is a more complicated question.

If you see “The Matrix Resurrections” in a theater, and you’re getting popped for parking or have to pick the kids up from a babysitter, I would say that you can skip the post-credits scene. Like much of the movie, it’s a joke, a throwaway, not something that points to the wider mythology or suggests where the franchise is now headed. It is mere a joke – a dad joke at that! (The best post-credits joke scene remains in “Spider-Man: Homecoming,” with Chris Evans’ Captain America teaching you about patience.)

However, if you are watching the movie on HBO Max (where it will also be available), definitely skip a little bit to the end and watch the post-credits scene. It’s fun and the kind of delightful send-off you would expect from a movie this jovial and weird.