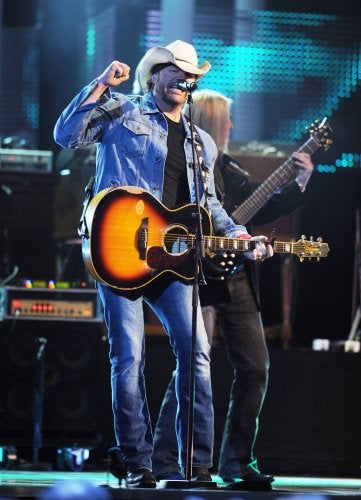 Most viewers of a TMZ-acquired video agree there was nothing noble about the Nobel Prize party antics of C&W singer Toby Keith. At one point during a Will Smith-led rendition of “Rapper’s Delight,” Keith slanted his eyes with a few fingers when the lyrics mentioned Asians:

see i am wonder mike and i like to say hello
to the black, to the white, the red, and the brown, the purple and yellow
Yesterday Asian American Justice Center spokeswoman Leonie Campbell-Williams issued this statement:
“Mr. Keith embarrassed himself with his impromptu pantomime to Will Smith’s song after the Noble [sic] Peace Prize concert in Oslo last week. While some just shook their heads in disbelief, it is important to let Mr. Keith know his gesture was offensive and that we hope he understands why it was so inappropriate.”
When TheWrap called the D.C.-based Center and asked if a lawsuit was being considered against Keith for his Shanghai gesture, spokeswoman Nicole Duran said it was not.
The possibility of legal action doesn’t seem so far-fetched, however: Earlier this year Lucie Kim, a Korean American woman, sued teen singer Miley Cyrus for similarly slanting her eyes at a private party – that image had been captured by a camera and posted on TMZ.
The case was tossed out but Kim and her lawyer, Henry M. Lee, are contemplating an appeal.
Lee, however, noted that since Keith’s action occurred during a performance, his case is a step removed from the Cyrus incident.
“There are some significant differences,” he said. “Artistic expression is always protected. [Cyrus’ gesture] didn’t take place onstage.”
We wondered if actors are less prone to making these kind of gaffes in public than singers, who would seem to be protected under artistic expression laws as long as they are singing.
“On the street they’re not performing,” said Lee of actors, “so they may be more on guard for their actions.”
We’d just like to know what gesture Keith had in mind had he decided to signify for “the purple.”
x
Looks like you're enjoying reading