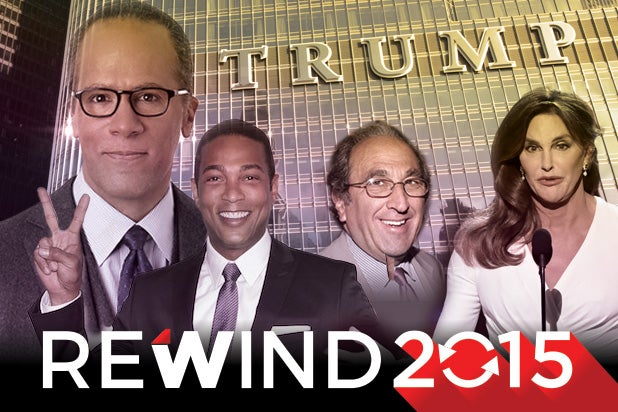 TV news producers and political websites expected to cover the “Back to the Future” presidential campaign with Hillary Clinton and Jeb Bush climbing to the top of their respective fields.

But Donald Trump had other ideas, launching his rollercoaster campaign in June by labeling Mexican immigrants rapists and murderers–and he’s been yapping ever since.

The media’s hung on every word. Here’s why Trump and four other media movers were 2015’s big winners.

The real-estate-mogul-turned-presidential-candidate has dominated cable news screens and news sites for six months, toying with the rest of the Republican field — and media executives–as an outsider undaunted by the Beltway blowhards he attacks for trying to bring him back to earth.

Trump has operated from a different playbook, making himself available daily to the media with no handlers or off-limits questions. Sprinkled in has been a never-ending stream of Twitter tirades and controversial soundbites at the expense of Muslims, Mexicans, African Americans, etc.

It’s catapulted him to a double-digit lead atop the GOP pack and an immovable position in the news cycle. For better or worse, Donald Trump was the media’s biggest 2015 winner.

But scandal plagued Williams, allowing Holt to leap ahead of the line to become the king of the evening news.

Holt’s steady tone and likable onscreen persona has meshed well with viewers who’d been loyal to Williams for a decade. His “Nightly News” won November sweeps in viewers and the advertising-coveted 25-54 demo and he’s routinely winning in both measurements on a monthly basis.

From the fever-pitch buildup for Jenner’s Diane Sawyer interview (which netted 20 million viewers) to the Vanity Fair cover that introduced her post-transition self to the world, Jenner dominated the headlines for much of the year.

Add in her E! reality show chronicling her new life, relentless news media coverage and her ESPY Award for courage, and you have a megastar.

Controversy has swirled around the former Olympian, including for her involvement in a fatal four-car accident in February, but her rise to fame — and growing pot of money — made her a clear force in the entertainment world, and society at large.

4. Chanting the N-word, Penis Biting, Oh My! The Rise of Don Lemon

Longtime CNN weekend anchor Don Lemon became the network’s permanent host at 10 p.m. in March. Since then, ratings, and his profile, have grown.

Buzz has followed Lemon for his high-profile magazine features, his use of the N-word on screen while reciting it in full; his advice to a Bill Cosby accuser on penis biting as an effective measure of prevention and the subject of over 30,000 calls for his removal from the airwaves. Which is why TheWrap suggested that CNN to swap Lemon with Anderson Cooper at 8 p.m.

Ratings are up as well: From March through December, the 10 p.m hour is up 44 percent in viewers and 34 percent in the demo. Many media analysts think Lemon’s stunt made him a loser; but every headline, good or bad, has made him rare appointment TV at the network.

NBC News chairman Andy Lack was anything but indecisive when he faced a daunting situation at 30 Rock in April with the division’s credibility hanging off a Brian Williams-created cliff and MSNBC’s ratings underwater.

The former NBC News president engineered a potential comeback story for the ages. The disgraced former “Nightly News” star rebuilding his credibility in the minor leagues at MSNBC (so far, so good). Other NBC flagship shows, namely the “Today” and “Meet the Press,” are also on the rise under Lack — and Deborah Turness’ — leadership.

As TheWrap reported, some ratings progress has come: Total viewership is up while younger viewers have fled.