“Uncharted” is upon us.

The video game adaptation, which just had an impressive debut weekend (with Sony brass already describing the film as “a new hit movie franchise”), stars Tom Holland as adventurer Nathan Drake and Mark Wahlberg as his older mentor/fellow adventurer Victor “Sully” Sullivan. Together, they are hunting for hidden treasure and lost pirate ships – you know, the usual. The movie is filled with oversized action set pieces, and the biggest, most memorable scene of the bunch involves Holland’s Drake getting ejected from an airplane and jumping from one netted cargo container to the next, all of them still tethered to the plane and blowing in the wind.

It’s a moment that captures the movie’s roots (the film is based on a series of successful video games published by Naughty Dog for the PlayStation system of consoles) while also offering a thrilling, cinematic centerpiece all of its own. (Even if you haven’t seen it, much of the marketing behind the movie uses this moment extensively.) It’s also a scene so important that the movie opens with this scene, then goes back in and fills in a bunch of the story, and then comes back to it.

TheWrap spoke with several key members of the production about how the sequence came together, what technology it took to pull off (robotic arms!), and where the inspiration came from.

The origins of the sequence can be traced back to 2011, when Naughty Dog released “Uncharted 3: Drake’s Deception.” That game featured a very similar sequence. Drake hops aboard a large cargo plane, gets found out, is ejected with the cargo, and must jump from one pallet to the next. Scott Rogers, the supervising stunt coordinator and 2nd unit director had never played the videogame before signing on, somewhat late in the process (he described it as “a little bit of a whirlwind”).

Instead of playing through the game, Rogers watched as many YouTube videos of the sequence as he could get his hands on. But he knew that it couldn’t be a one-to-one Xerox of the original game sequence. “That’s the funny thing and it’s interesting, and I’ve done a number of superhero movies,” Rogers said. “It doesn’t translate. It might look good in a not-real-world situation and then you buy into it, but the minute you add real people and you’re making a real movie some things just don’t translate, they just don’t look good. Because you’re now dealing with real physics, not fake physics. And when you have real things in a fake environment, the realness of it still is real. The real body moves and gravity still affects the body the right way. But if it’s all fake things, other things, then it doesn’t affect them the same way.”

They were faced with an interesting conundrum – the easiest (and safest) way to capture the action would be to film it horizontally, with actors and stunt performers on the ground. The problem, of course, was that the inherent realism that Rogers was searching for, would remain elusive. It just wouldn’t look true. “The body’s not going to look like it’s weightless, bouncing around on something,” Rogers said. The solution? Go vertical.

Up in the Air

If a ground level (or even elevated-but-flat) option wasn’t going to work, the only place to go was up.

“We literally turned the set almost vertical, not quite. We came up with the different angles and we played because then now gravity is actually helping you. And you don’t have to have your full weight on the crate itself,” Rogers said. “To make it look like he’s bouncing on the crate, or he is falling off, or flying past him, we use gravity to our benefit as opposed to against it.”

The team started building up – and outside. “It was all in a parking lot outside the stage because one key for visual effects is if you have a daylight exterior scene, it’s always better to shoot it in daylight exterior,” “Uncharted” director Ruben Fleischer, whose past credits include the “Zombieland” films and the first “Venom,” said. “And it was against a green screen or blue screen.” 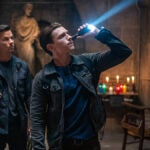 Rogers conferred with special effects supervisor Uli Nefzer, who was then was tasked with building the structure that would hold the boxes and the mechanism that would make them move (more on that in a minute). Nefzer stated that the tower they would have to build would be huge and have to have major reinforcement. Rogers said yes, they would. But they still needed them. “We built some container structures,” Nefzer said. “But all, of course, heavily reinforced. Everything, that was all statically calculated. And then, yeah. It was an adventure.”

And what were connected to those towers? Why giant robotic arms, of course.

A Surprising Connection to a Harry Potter Ride

How the crates would move became a chief concern. Yes, the angle that the stunt was staged at was pitched, but you couldn’t just dangle things from the top of the structure. The crates’ movement had to be more exact, for both the safety of the performers and the quality of the shots.

The idea initially came from Nefzer, who was tasked with coming up with a creative solution. “We had some discussions and I said, ‘Well, not the cheapest way, but I think the best way would be if we use robot arms from factories, and if we can combine them together to a pallet, then we are on the right way,’” Nefzer said. The production agreed. They would be using robotic arms to shoot the scene.

The arms they used are from KUKA, a German manufacturer of industrial robots. These are the arms that help build cars now and they are, somewhat appropriately, also used in theme parks. If you’ve ever ridden Harry Potter and the Forbidden Journey, the hallmark Harry Potter attraction at several Universal Studios theme parks around the world, then you’ve had an up-close encounter with a KUKA arm. The KUKA arm was also part of one of the last truly great Innoventions displays at EPCOT. Called The Sum of All Thrills, the attraction allowed you, with the use of a KUKA arm, to design your dream theme park experience. It showcased how powerful and how programmable the arms really are, something that came into play on “Uncharted.”

Finding the arms themselves required a bit of treasure hunting and problem solving, too.

“KUKA the company itself, they are bit careful concerning this kind of things. Because if something happens, of course, it’s their name,” Nefzer said. “I got a contact from a dealer from secondhand things. And, we came together. I explained to him and started playing around.” KUKA invited Nefzer to one of their facilities; they set up two KUKA arms with cardboard boxes attached to them. They used the factory settings and played around with the arms, just to see what they could do. They shot test footage and sent it to Sony and the producers to get the financial sign-off. “Now the next step was, how many do we need?” Nefzer said. “How many can we afford? We ended up with five.” Fleischer described the arms as “incredible.” 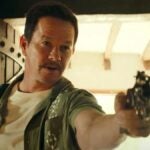 It took Nefzer and his team months to actually program the KUKA arms to react the way they wanted them to. “We tested quite a lot,” Nefzer said. Since they only had five arms, the arms would “play” two different sets of cargo boxes. (Nefzer said the change over from one box to the other was “not too easy.”) If something wasn’t working during the actual filming, they could course correct, rewriting the program so that the KUKA arms would do what they needed them to do.

Rogers and his team broke the sequence into two halves – during the first half, our hero is falling, and at the end he is climbing back up (hence the changeover on the boxes too). “We did the first half is my more of a climb and it’s all steeper. And the KUKAs moved in that relative motion. And the second half, they were more horizontal and we could run in the stuntman and Tom could. We had these big lines above them saved him and we literally just turned them on and they ran their program. And they were running, jumping, physically jumping from one to the other. And if they fell off, they wouldn’t fall to the ground and we’d catch them, but they would literally fall off. It was all like real stakes. We weren’t just lightly tapping over.”

There was a close call that briefly decommissioned one of the KUKA arms, too. The biggest box had two performers standing on it. “Both hit it on the same time, so the force was too much,” Nefzer said. It dislodged the KUKA arm. “But the arm and the gearbox was changed overnight. We it very quickly from KUKA, and it was changed overnight,” Nefzer said. “And then, we could go again.” From the top!

The relative control and safety of the KUKA arms also meant that Holland could do more of his own stunts. Rogers, who really threw Carrie-Anne Moss and Keanu Reeves off a building in San Francisco for “The Matrix Resurrections,” knew the value of seeing the actor doing it themselves.

“Tom’s so physically gifted that it really opens up what you can do,” Rogers said. “If you can do a real stunt, it’s either one or two ways. It’s either you start on his face that goes into this gnarly stunt and you realize, oh my God, that’s him, and it’s still him. It’s like the one where he gets yanked out the plane, because I pitched that one. And then we did it. We showed the test and it made the trailer, it’s a super great shot, because you see his face, he gets yanked out of the plane. The inverse is you see this thing coming to you and all of a sudden it lands in the foreground and it’s a close-up of Tom’s face and you realize. And to me that just gives authenticity to the scene and Tom’s ability to his physical prowess allows us to do so much of that.”

The “Uncharted” plane sequence was a moment inspired by a video game and brought to life with the goal of realism always in mind. At the very least it explains why the sequence is so memorable. And why it wound up in so many trailers. 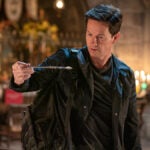