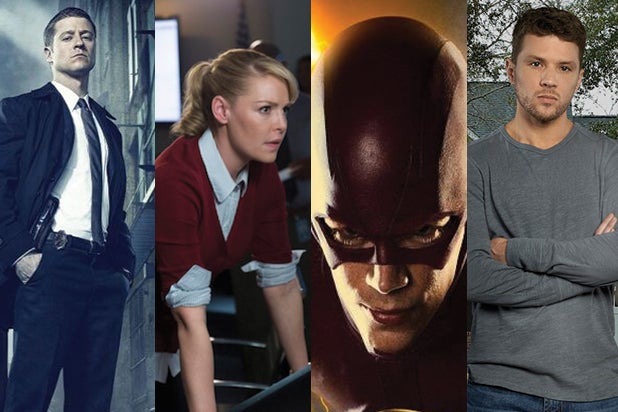 So the other networks had to get creative.

At venues across Manhattan, network executives stood before hundreds of media buyers and told stories. Their hope is that those buyers will repeat those stories to their clients, who advertise things like cars, movies, and fast food, and that they will buy several billion dollars’ worth of ad time.

Here are the tales each network told.

The network was in a nice place for a network to be: It could afford to be honest. There’s no easier bragging point than “We’re No. 1,” which NBC is in the key 18-49 demographic.

Also read: NBC Holds for Applause at Upfront, and Gets Some

Unfortunately, advertisers know that isn’t the norm — and have to be nervous that it’s a fluke. For the first time in a decade, aided by the Olympics and the hits “The Voice” and “The Blacklist,” NBC tops the 18-49 demographic that advertisers like the best.

NBCUniversal CEO Steve Burke said at the start of the season that NBC was $500 million to $1 billion behind rivals ABC, CBS and Fox, in part because it charges advertisers 20 percent less than CBS and Fox due to its years of low ratings.

NBC pledged to hold onto No. 1. And head of ad sales Linda Yaccarino hopes to use the ratings success to close the gap in ad spending between NBC and its rivals. The attempt to catch up begins now.

The network had a very simple sell last year: It was tops in ratings and total viewers. This year it’s only tops in total viewers. So CEO Les Moonves made the case, as he always does, that advertisers should care more about total viewership than adults who happen to be between high school and their 50s.

Also read: CBS New Schedule: ‘Two and a Half Men’ Ending, and So Is Midseason

CBS also makes the case that it would have beaten NBC if not for sports, which is kind of like the “Scooby-Doo” villain saying he would have gotten away with it, too, if not for you kids. The fact is, sports count. Advertisers love them. The Olympics clean up for NBC, this year the Super Bowl delivered for Fox, and NBC’s “Sunday Night Football” is the top regular program on TV.

So you can’t blame CBS for upping its sports game, too. The network will begin airing NFL games on Thursdays next season, bolstering what is already the network’s strongest night.

If Thursday football is the hit CBS is expecting, you won’t catch the network next year talking about what might have been, if not for sports.

That median age is 47, making Fox the only network to have a median age within the key demographic. With its youthful spirit comes a sense of adventure. Fox entertainment chief Kevin Reilly made the case to advertisers that his network is reinventing how it does business.

He said Fox’s emphasis this season is on “eventizing” — creating shows that feel like events viewers will want to watch live. That doesn’t just mean sports and reality shows like a jump over the Snake River Canyon. (The upcoming “Jump of the Century” arrives four decades after Evel Knievel‘s failed attempt.) It also means producing scripted shows like a “Simpsons”-“Family Guy” crossover that Reilly hopes will feel like can’t-miss viewing.

With few positive numbers to lean on, ABC asked advertisers to think emotionally — and argued that is has the best brand. ABC said its relations with Disney, Pixar, Marvel and Lucasfilm conjure associations with princesses, Buzz Lightyear, The Avengers and Jedi knights.

Also read: ABC Upfront: We May Lag in Ratings, But We’re the Best Brand

ABC entertainment chief Paul Lee said that with shows like “Scandal,” ABC drives a more passionate conversation than any other network. He also said the network had given its showrunners unusual creative freedom, pointing to Shonda Rhimes‘ takeover of Thursday nights with “Scandal,” “Grey’s Anatomy,” and the new “How to Get Away With Murder.”

And he stressed a commitment to diversity, with 2014-15 shows like “American Crime,” from “12 Years a Slave” Oscar winner John Ridley, as well as “Black-ish,” “Cristela,” and “Fresh Off the Boat.”

But Jimmy Kimmel, who spoke after Lee, was quick to call his boss on the “bullshit” spin about branding.

The network co-owned by CBS and Warner Bros. lags behind the other networks and courts a younger demographic. But president Mark Pedowitz made the case that his network is in the midst of a successful transition. Rather than focusing mostly on women 18-34, it has branched out to men as well, especially with the DC Comics hit “Arrow” and its upcoming spinoff, “Flash.”

Pedowitz said the CW is no longer “the Gossip Girl” network, and is changing in many ways, including putting a big emphasis on comedy. He hopes the “Vampire Diaries” spinoff “The Originals” will provide a big lead-in to one of the most different comedies of the fall.

“Jane the Virgin” is about a hardworking young woman who pledges to wait until marriage to have sex. But her plans are capsized by an accidental artificial insemination.

Pedowitz hopes the show will not just invigorate Mondays, but lead the CW’s charge into comedy — virgin territory.