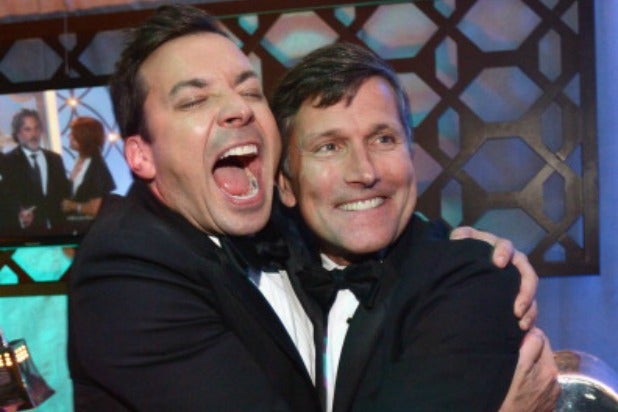 NBC played Lady Gaga’s “Applause” to start its upfront presentation to advertisers, and the insinuation wasn’t subtle: It finally deserves some.

The network is tops in advertisers’ favorite demographic, 18-49, for the first time in a decade. And it drove the message home Monday morning as it kicked off the broadcasters’ week of upfront presentations, in which they try to sell their 2014-15 shows to media buyers.

(Fallon appears above in a file photo with NBCUniversal chief Steve Burke.)

Despite the joke, the network stressed that it didn’t owe its success to one or two shows — or even to the Olympics.

“Late Night” host Seth Meyers, who opened the presentation, earned his first big laughs at the expense of NBC’s somewhat inconvenient choice for its presentation: The Javits Center, located at the far west end of Manhattan, in what Meyers called the city’s “stabbing district.”

But then he found an even more successful applause line, when he noted NBC’s ratings.

NBC just agreed to pay $7.7 billion to air the Olympics through 2032. But NBC entertainment chief Bob Greenblatt stressed that the network would have been No. 1 this season even without the Winter Games.

Next year, NBC has another major draw: the Super Bowl. It will give “The Blacklist” the plum slot after the game, hoping to draw a big audience for the drama’s move to Thursday nights, NBC’s biggest problem area.

Last year, NBC was in a very uncertain place. The network showed advertisers a duet between Fallon and Jay Leno as questions abounded about how the “Tonight Show” transition would go down.

But it has proven a greater success than anyone imagined. NBC ad sales chief Linda Yaccarino noted Monday that “The Tonight Show” is beating ABC’s “Jimmy Kimmel Live” and CBS’s “Late Show With David Letterman” combined — every night.