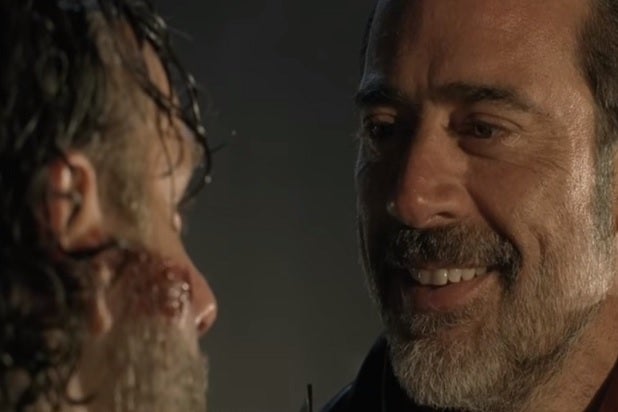 (Spoiler Alert: Do not keep reading if you have not seen the midseason finale of “The Walking Dead”)

With “The Walking Dead” Season 7 midseason finale behind us, series star Andrew Lincoln wants fans to know that Jeffrey Dean Morgan will get his comeuppance for the torture he inflicted on Lincoln on set.

“I wasn’t good company in the first eight episodes,” Lincoln told TheWrap. “Alexandria was also not a good place for children. My language was pretty much like a sailor. He enjoys his role way too much, and he’s going to get his if you know what I’m saying.”

Lincoln is more than capable of backing up that bold talk. He and co-star Norman Reedus have engaged in numerous on-set pranks over the years. So if Morgan wakes up in a foreign country with amnesia, we’ll know who to blame.

Also Read: 5 'Walking Dead' Theories on Who Was Following Rick and Aaron

Lincoln also touched on the emotional reunion shared by Daryl and Rick, which saw the best friends hug so hard that the whole fan base felt it.

“You only saw the tip of the iceberg,” he joked. “When they called ‘cut’ they couldn’t pry us apart. We just wept on each other’s shoulders for about three hours. And they just kept filming til they ran out of film. But I actually did get an email from Norman saying, ‘I think it went down.’ So obviously people were happy, no one more so than us.”

And what about the griping of fans over the course of the first half of this season?

“Obviously I’ve heard that people are not happy and that makes me unhappy because of the amount of work we all put into the show,” he said. “There is a sense of a bigger story that’s being told and I have absolute faith in Scott, the writing team, and the producers of the show. But I will say that I think the back eight are the exact opposite of the front eight.”