“The Walking Dead” Season 7 will most likely see Rick’s group go to war with Negan’s Saviors, but one war is (temporarily) over: the glitter war between series stars Andrew Lincoln and Norman Reedus.

“The glitter war–there is a very, very fragile truce that’s happened,” Lincoln told TheWrap. “I mean, it’s not going to take much to reignite this glitter war. But for the time being, there is an armistice.”

It all started back in July, when Reedus pranked Lincoln by dumping a whole bunch of glitter into the air conditioning of Lincoln’s car.

“The most upsetting thing is that when it’s extremely hot and I crank up my [air conditioning], still bits of glitter come out and stick to my face,” Lincoln said.

“And it’s been months. We’re talking months at this point. Especially if I crank it. I don’t know how much he put in but by God it’s still coming…But it’s not over yet. He may have won the battle…” he said before trailing off menacingly.

Lincoln did get a modicum of revenge at this year’s Comic-Con, when he threw a handful of glitter into Reedus’ face during “The Walking Dead” panel. You can see the aftermath of that attack in the photo below. 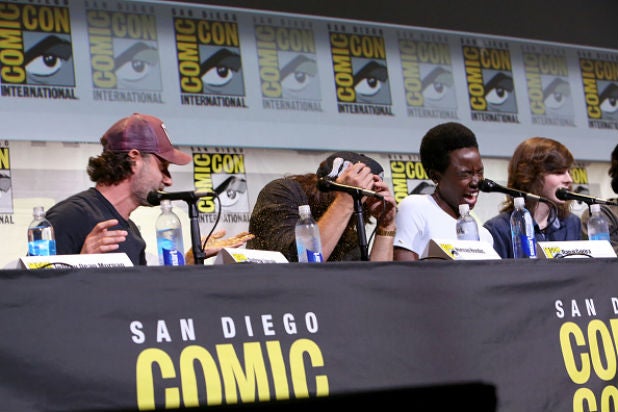 “Don’t reignite it,” Lincoln said with a laugh. “All it’s going to take is this article, so please don’t dwell on it too much.” Sorry, Andrew. But to paraphrase newspaper magnate William Randolph Hearst (and “Citizen Kane”): “You provide the glitter, I’ll provide the war.”