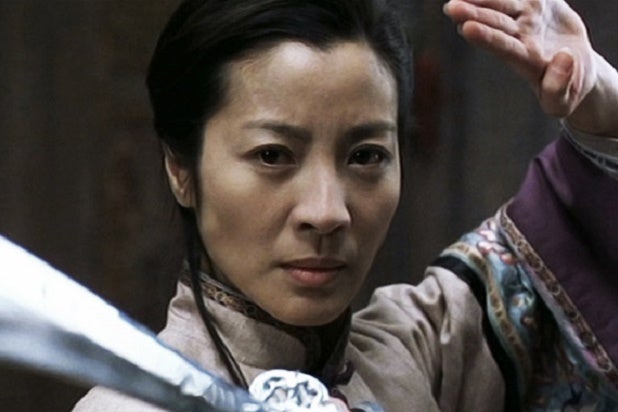 Anyone expecting the “Crouching Tiger, Hidden Dragon” sequel to trigger a revolution in the way Hollywood delivers new movies will be sorely disappointed.

“It might be a step on the time line that will someday see movies available in homes the same day they come out in theaters,” said an executive at a rival film company, “but that’s not going to happen until the major studios and the exhibitors are on board, and that’s not going to be anytime soon.”

Just how far the industry has to go before embracing day-and-date movie releases became clear on Tuesday after the Weinstein Company announced its plan to release the “Crouching Tiger” sequel simultaneously on Netflix and in IMAX theaters next summer.

The nation’s biggest theater chains — AMC Theatres, Regal, Cinemark and Carmike — said that they would not carry the “Crouching Tiger” sequel. The sequel will be co-produced by TWC and Netflix, and begin streaming on Aug. 28, 2015 — the same day it is scheduled to hit theaters. Cineworld, Europe’s No. 2 theater chain and top IMAX operator, said it wouldn’t participate, either.

That leaves IMAX with the five theaters it owns and operates, and whatever smaller chains it can get on board to screen the film. AMC and Wanda Cinemas are the largest operators of IMAX-equipped theaters globally, and they splashed cold water on the plan in a pointedly icy statement.

“No one has approached us to license this made-for-video sequel in the U.S. or China, so one must assume the screens IMAX committed are in science centers and aquariums,” it said.

Richard Gelfond, IMAX’s chief executive, responded to the criticism by saying the plan would ultimately benefit the theater owners.

“I understand change isn’t always the easiest thing in the world, it’s easier to stick with the status quo,” he told TheWrap, “but on the other hand, if you don’t try to change you get stuck in a certain place. We made our reputation by innovating.”

The future of film releasing aside, just the announcement of the plan stands to benefit the principals.

TWC co-chair Harvey Weinstein is getting a ton of publicity for producing a sequel that appears much closer to a direct-to-video release than the Oscar contenders he’s so adept at handling. “Crouching Tiger, Hidden Dragon: The Green Legend” will arrive 15 years after the original film won the Academy Award for Best Foreign Film and took in more than $213 million globally, but without its main stars and iconic director Ang Lee.

By co-financing the film, Netflix gets a degree of credibility as a film production force, but that’s more image than reality at this point. The larger goal is of course to evolve into the primary streaming site for new movies, and this is step in that direction — one that the company hopes Wall Street will appreciate. Whether that’s worth its $40 million-plus investment remains to be seen.

The benefits for IMAX are less clear and like so many things in Hollywood these days, it may have a lot to do with China.

“Remember, we’re a global company, 60 percent of our revenues are from international sources,” Gelfond said. “In China, there is no Netflix, so this can play in all our theaters in China if it gets through the quota. That could be 200 theaters in China alone.”

Despite Tuesday’s backlash and theater owners digging in, most in the industry believe it’s a matter of time until at least some movies become available in homes.

“You’re never going to see ‘Transformers 5’ on Netflix,” said Exhibitor Relations vice-president and senior analyst Jeff Bock, “but you can’t change the fact that the studios and theater owners are in business together and that they’re eventually going to have to work something out.

“Exhibitors get it, but it’s not going to be easy to come up a plan. If you were a theater owner, would you want to give up admission and concessions in return for a slice of the streaming pie?”