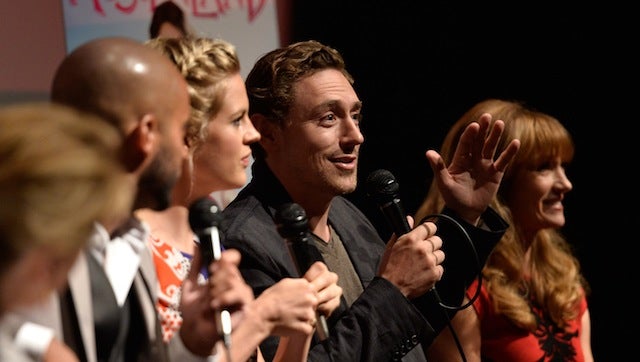 An at-times farcical romance that takes place at a Jane Austen-themed vacation in the English countryside could only have been thought up by Americans — and not just any old Americans but Utah Mormons.

"It’s like the royal family obsession over here," said J.J. Feild, who plays a British actor wooing Keri Russell's visiting Yank in the upcoming "Austenland." "It goes to a whole 'nother level that we don’t really have back at home." American Anglophilia came up during the Q&A following an "Austenland" showing at the Landmark Tuesday night. The film's British cast members turned out for the special "Girls' Night Out" edition of TheWrap's Independent Screening series  moderated by Editor-in-Chief Sharon Waxman.

"I think having an American eye on it brought that kind of zany, Utah, 'Book of Mormon' humor to Jane Austen," said Feild. "I can't think of a British director who would have brought that to it."

See video: Keri Russell Is Searching for the Fictional Man of Her Dreams in 'Austenland' Trailer

Although it helps to be an Austen-ite, anyone who's ever been caught up in any kind of geek culture will find a way in to relate to Russell's character.

Her lovelorn leading lady signs away her savings to participate in a completely immersive Austen experience across the "pond," where she's joined by fellow tourist Jennifer Coolidge, a quintessential ugly American who's more interested in wearing bustiers than any literary connections.

Seymour is the uppity proprietress of the estate where all this lavish play-acting occurs, and Feild plays an actor portraying a Darcy-like role in the immersive experience who might really be developing a love for Russell, much to her confusion. Feild is "better than Darcy!" joked co-star Ricky Whittle. "Darcy wishes."

Is there anything remotely similar to Austenland in real life, Waxman asked? All Feild could think of was a British amusement park called Diggerland near the filming location — but that's devoted to driving dump trucks not costume recreations.

But "there should be" such an attraction as Austenland, Seymour said. "I think (executive producer Meyer) could easily open one if she wanted to. Or 10! We thought that actually this might make quite a good theme park. People like getting dressed up and love fantasizing. You shouldn’t have to wait for Halloween to do it."

Feild said Hess wanted him for the Darcy role "because I'd done the lead in a Jane Austen thing called 'Northanger Abbey.' He said, 'Would you be willing to make fun of yourself?'"

But, he was quick to add, "Ultimately no one is ever gonna be Colin Firth. He is the god of Jane Austen."

An audience member told King, a Scotlander playing an American playing a Brit in the films, "I'm a big fan of 'The New Normal,' and I can't believe you're British, Georgia King!" But for those who do know from whence she hails, King gets one frequent query. "I think my top-asked question since moving to America," said the actress, "is: 'Are you in "Downton Abbey"? Do you want to be in it?'"