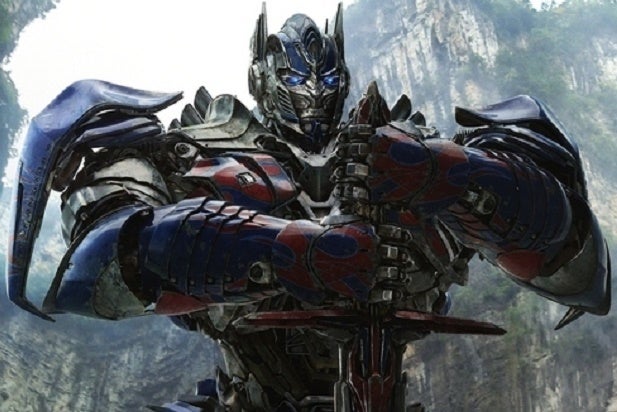 Paramount’s “Transformers 4: Age of Extinction” will dominate the box office this weekend, and there’s a good chance it will be the summer’s first movie to open to more than $100 million.

Director Michael Bay‘s PG-13-rated morphing robots epic is hitting on all cylinders ahead of its debut Friday in 4,200 theaters in North America and roughly 35 foreign countries including China, where part of the film is set. The tracking is through the roof, online ticket sales are massive and there are no other movies opening.

But will it be too much — as in a running time of two hours, 45 minutes — of a good thing?

One of the major concerns about a lengthy run time is the math — a longer movie simply can’t play as many times in a day. The huge theater count should mitigate that to a degree, but it certainly won’t help “Transformers.”

Another concern is that the butt-numbing run time could hurt word of mouth. The reviews are so-so — 57 percent positive on Rotten Tomatoes — so that could matter in in today’s world of digitally fueled instant feedback. Or not.

“I’m sure some people will walk out and say it was too long, but teenagers don’t care, and if you’re one of the true ‘Transformers’ faithful, that run time is a good thing,” said Exhibitor Relations vice-president and senior analyst Jeff Bock. “This is a proven quantity and they’re not reinventing anything.”

Other movies have hit the box-office heights with extra-long run-times. “Avatar,” the highest-grossing film of all-time, was about the same length. “The Hobbit” movies have been roughly that long, and the earlier “Transformers” movies were all in the two-hour, 30-minute range as well.

Mark Wahlberg steps in for Shia LeBouf as the star of “Age of Extinction.” The action takes up four years after the events of the previous film, 2011’s “Dark of the Moon.” He plays a car mechanic who with his daughter (Nicola Peltz ) finds a deactivated Transformer, Optimus Prime. That draws the attention of the Earth-saving Autobots, their enemies the Decepticons and a paranoid government official (Kelsey Grammer) who declares war on the alien shape-shifters. Stanley Tucci, T.J. Miller, Jack Reynor, John Goodman, Ken Watanabe, John DiMaggio and Reno Wilson co-star.

The $165 million effects-laden extravaganza was backed by Paramount, Di Bonaventura Pictures and Hasbro, the company’s whose toys inspired the franchise, and has a Chinese co-producing partner as well. Steven Spielberg and Mark Vahradian executive produce.

You can make the case that Bay’s trademark explosions and spectacle are the biggest draws for this movie, and they get the star treatment here. “Transformers 4” is the first film shot with an IMAX 3D Digital camera, and it will be in all 353 of the large-screen giant’s North American theaters. Those premiums and more from 3D screenings are likely to provide a major boost to the bottom line.

The higher tracking goes, the less precise it becomes, so projecting gets tricky. The numbers have it around $100 million at this point, but few would be shocked if “Age of Extinction” tops the previous highest debut in the series, the $108.9 million that “Revenge of the Fallen” took in on this same weekend in 2009.

This will be Paramount’s first release of the summer, and they’ve picked a good time for it.

“We’re coming off a slow weekend, there’s no competition this week and there won’t be anything like it over the July 4 weekend,” said Bock. “There are good reasons the other studios are staying out of the way, and this should be the biggest movie of the summer.”

It was dominating advance ticket sales at MovieTickets.com and Fandango, at which it repped 96 percent of Tuesday’s business, and sales were in line with “Captain America: Winter Soldier,” “Godzilla” and “X-Men: Days of Future Past” — all of which opened above $90 million. Its social media profile is significant, particularly Facebook, but not overwhelming, according to BoxOffice.com.

All things considered, the odds look good that it will hit $100 million over its first three days, which leads to the next question: Can it be the year’s first film to hit $1 billion globally?

The growth in the foreign market, particularly China, suggests that it can, since the “Dark Side of the Moon” hit $1.12 billion three years ago.

Paramount filmed part of “Age of Extinction,” a co-production with the state-owned China Movie Channel, in Hong Kong, so Chinese moviegoers will have the chance to see some of their their biggest skyscrapers destroyed, too. They’ll see popular Chinese stars Li Bingbing and heartthrob Han Geng, as well.

Each successive “Transformers” has made more than the last in China, and the “Dark of the Moon” earned nearly $180 million.

“If this doesn’t hit $200 million there, something will have gone wrong,” said BoxOffice.com vice president and senior analyst Phil Contrino. “We’ll see how things play out over the next week, but you could see our domestic total and the Chinese number get surprisingly close.”