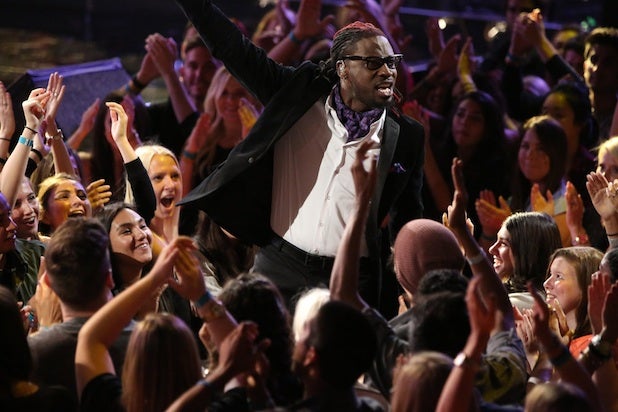 Congratulations! We’ve made it to the second week of Live Rounds on NBC’s “The Voice.” Now let’s braid each other’s hair and chat about my highlights from this week’s Top 10.

1. What is a Rixton?
UK band Rixton opened the show with a performance of their single “Me and My Broken Heart.” While I’m sure they’re “tearing up the charts” as Carson stated, I have to wonder why they’re here? Also, I’d also like to know just what is a “Rixton,” and is there a cure for it?

2. Coach fashion
Adam Levine is dressed for the drive-in. Shakira is officiating a high-class bullfight. Usher is in black, and Blake Shelton is everyone’s cool math teacher.

3. Dialing it down
Team Adam’s Kat Perkins and Team Usher’s Bria Kelly were both asked to show their softer sides this week. Kat performed the classic “Landslide,” hitting some pitch perfect moments in the second half that redeemed any over-singing she may have done in the first half. Bria Kelly did not have as much success with the aching “I’m With You,” struggling to find her footing and her place within the song. This misstep confused the coaches, prompting Adam to say, “I want to see more of all those things I love so much about you.”

4. Well, that got weird
This season’s first Instant Save was Team Shakira’s Tess Boyer, who lived to see another round thanks to an outpouring of Twitter support last week. Her “Ain’t No Fun” was strong despite an arrangement that threatened to overwhelm her voice. Blake noted that she never missed a note, and that he would have “screwed the pooch” had he been asked to perform the song. Adam responded that Blake had screwed many pooches, and things got really weird really quickly.

5. Moving a room without moving
Team Blake’s Audra McLaughlin delivered one of the best vocals of the night with her rendition of “You Lie,” giving a passionate and accomplished performance that was her best to date. Blake called it her “moment,” and Usher pointed out that she managed to move everyone without moving (no small feat).

6. 867-5309
There was an ongoing joke this week that Blake tweeted out Adam’s number during the show, sending a cavalcade of fans scrambling to call Adam on set. However gamely the coaches tried to play it, it was clearly a manufactured brouhaha (with the added benefit of a Sprint tie-in). Fool me once!

7. This is definitely it!
OK, I love Josh Kaufman. I love Kenny Loggins, and I love “This is it.” Therefore I had to love Josh’s performance this week. While it wasn’t as electric as last week’s “Stay with Me,” it was still a fantastic number that showed off his compelling tone, insane range and “manly falsetto” (per Usher).

8. Putting the drama in Drake
Team Adam’s Christina Grimmie stepped up her game even more this week, flipping the Drake song “Hold On, We’re Going Home” on its head. From the stripped down opener behind the piano to the roaring last half at the front of the stage, it was her most dynamic performance yet, giving Adam (and me) goose bumps.

9. The Blake & Jake show
I think Team Blake’s Jake Worthington is a great singer, but I enjoy him best when he’s just chatting with Blake, building a bromance that should make Adam envious. While Jake’s “Run” had its bright spots, he really shined when he was offstage quipping about his “ugly” iTunes picture or offering Blake a kiss. That was the stuff of comedy gold.

10. Oh, we know your name!
My favorite performance this week would have to go to Team Adam’s Delvin Choice for his fiery “Private Eyes.” Not only did Delvin sound amazing, but he also whipped the crowd into an utter frenzy – fooling them into thinking he was finished only to pause and yell “Do you know my name??” before vamping the heck out of the last lines. It was like Sunday morning at an alter call.

11. Mic check
I’m happy to announce that Team Shakira’s Kristen Merlin did NOT have any mic malfunctions this week. She used the time wisely – doing a lovely, subtle rendition of “Let Her Go” which was a great match for her voice. This was her best performance so far, making her the underdog to beat going into the top 8.

12. Text parenting
Blake asked Sisaundra about text parenting. Well I just want to chime in that this is a real thing, you guys. My parents still do it (EX: “Hey honey – should we put some money in your account? Did you wash the dog? Love, Mom and Dad”)…and yes, they sign all their texts with “Love, Mom and Dad.” Adorable.

13. We’re gonna need a new roof
While I was nervous about the idea of Team Blake’s Sisaundra Lewis covering Steve Perry‘s “Oh Sherry,” she really made it work. I think we’re quickly discovering she’s a vocal Superman, capable of bending just about any song to her iron will. She tore through this one with her usual intensity, ending with a crazy high note that seemed to go on forever. Adam said it best with “Everyone look up! There used to be a roof in here, but it’s gone. We’re gonna need a new roof.” Who needs a roof when you’ve got Sisaundra?!

Who are you hoping will make it to the Top 8? Did you call the phone number Blake tweeted? Be honest! Oh, and leave your thoughts in the comments.

Don’t forget to check out my album “In & Out of the Dark,”available on iTunes NOW. For more updates, follow me on Twitter: @katrinapmusic and visit my website, www.katrinaparker.com.